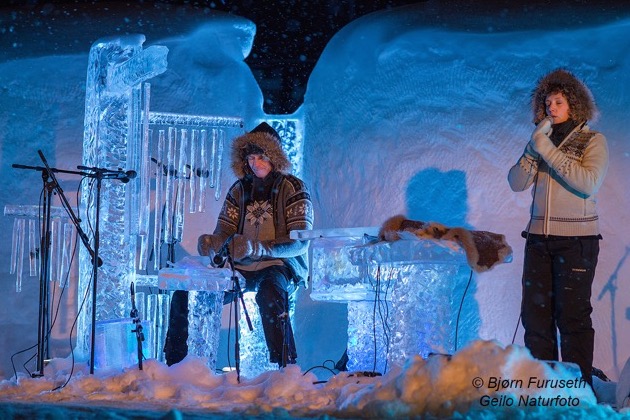 The Norwegian percussionist Terje Isungset is sitting by the window at his home in Bergen, where his house on the city’s fringes is the last before the surrounding mountains really begin to climb. He is in high spirits and just back from the latest European Ice Tour, during which he has played drums, marimbas, horns and trumpets – all chiselled, chipped and hewn from large blocks of ice. ‘The tour was very good,’ he says, ‘we kept the same ice throughout but repaired it now and again; the horns in particular are prone to melting.’ Around Norway, Isungset and his musicians transport blocks of ice by freezer trailer and further afield by air in their ordinary hold luggage, occasionally leading to unplanned changes in their sound. ‘This doesn’t restrict where we can perform, we just have to adapt the music to the instruments and let them decide.’ 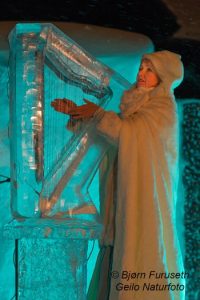 For the past sixteen years, Isungset has created and played his ice instruments with other musicians all over the world. Born in Geilo, a remote ski resort between Oslo and Bergen, Isungset learned traditional Norwegian music with his father as a boy then began his musical career proper as a drummer on the Bergen jazz scene. It wasn’t until 1999, when the Lillehammer Festival asked him to perform inside a frozen waterfall, that Isungset became transfixed by ice. A commission from Swedish state broadcaster followed, and was performed as part of the country’s millennium celebrations on 31 December 1999: ‘I wanted to be with my family for the millennium, so I only made the instruments and taught the musicians how to make the right sounds. My first experiments were with ice percussion only, since percussion was what I already knew.’

Isungset’s approach is as idiosyncratic as it is simple, and he is eager to keep his music from classification: ‘One of the reasons I came to drums and percussion was because I could work from a unique, homemade setup with wood, metal and stones.’ Using ice allowed him to avoid all reference points: ‘If you’re a drummer and your kit sounds like Tommy Williams, you might sound like Tommy Williams, but to me it’s best when you sound like no one else.’

Artificial ice looks perfect but has no sound, like the dead thud of a piece of wood.

Because ice is less resonant than wood or metal, amplification is required to allow Isungset’s creations to ‘speak’ properly, something he has embraced and incorporated into the music: ‘I work with sound engineers to create a wall of surround sound, which brings the audience into the ice world, enveloping them in the sounds of the natural environment, putting them at the heart of the sonic world.’ Not all Isungset’s concerts can – like his first, behind the frozen waterfall at Lillehammer – envelop the audience in his icy world, but with surround sound he attempts the same effect. ‘There’s a huge difference between indoor and outdoor concerts, but whether we’re playing in Greenland, watching icebergs at -38 degrees, or in the middle of a city like Tokyo, good sound engineering allows me to bring the ice as close as possible to the audience.’ 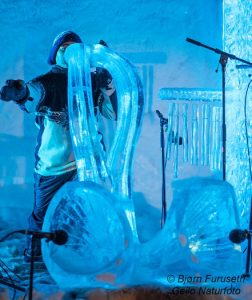 One of Isungset’s ice horns

But the music itself is the main event and, if there is one thing Isungset is clear on, it’s that only ice formed by natural means will do: ‘It’s very strange, because artificial ice looks perfect but has no sound, like the dead thud of a piece of wood.’ The glinting, glowing sound of his natural-ice instruments could not, in contrast, be more vibrant: ‘I tried artificial ice in Japan this winter, and at other times in Australia, Canada, India, Russia – all over the world. Even though different systems are used to manufacture ice in different countries, the product is always the same. Natural ice is never the same twice and it has a sound that artificial ice just cannot reproduce.’ Why is that? Isungset doesn’t know, and what’s more, he doesn’t wish to: ‘If you analyse and try to understand everything then the mystery will be gone; your intellect is working but not your heart. You’re thinking instead of listening.’ This philosophy informs all of his work: ‘when I teach masterclasses I try to avoid examining the music in too much detail, but rather talk about other things, since life and music are one and the same.’

In 2005 Isungset founded All Ice Records, a record label which releases albums of instruments made – you guessed it – from ice. Its recent release, Meditations, takes the ice itself as inspiration: ‘The music uses some of the most important ice in the world, from both the North and South poles, Alpine glaciers and distant pelagic icebergs.’ For Isungset, the journey of a single block of ice is a source of fascination:  ‘the water you are drinking now, already inside your body, could have been one of my ice instruments, or it might be in the future.’ Isungset is  keen to preserve this sense of mystery: ‘I’m not a scientist, I don’t want to analyse. I don’t want to understand everything – music and nature are things much bigger than us.’