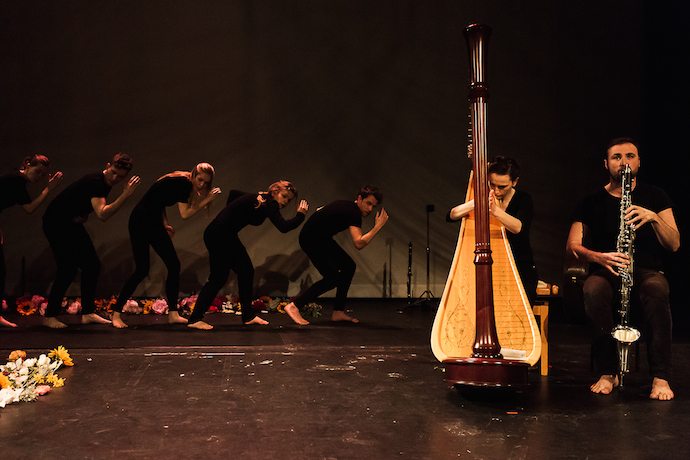 There’s a nice workshop-y vibe in the Cockpit Theatre, home to The Hermes Experiment’s new production, The Winter’s Tale. No backdrop, no props, no costumes. You get the feeling they’ve made a conscious decision to do away with all that frippery and concentrate on the matter in hand – their ‘musical reimagining’ of Shakespeare’s late play. Designer Sophie Mosberger has engineered a suspended crown of brightly coloured streamers emanating from a central ring. There are some plastic flowers strewn across the back of the stage. It’s less eye-popping than ruthlessly pared down with a hint of kitsch, and I rather like it.

The cast of nine, all in casual black, were soon busy on stage and I spent a few moments trying to find my way into this timeless, locationless hinterland of The Winter’s Tale. The familiar text was there, abridged, but otherwise faithful. Two male actors shared seven roles. The four musicians (harp, soprano, clarinet and double bass) intermittently dipped into spoken roles too. At one point it felt like there was going to be an awful lot going on, but I soon began to enjoy the ambiguity and the paring-down that is ultimately what makes this production so successful.

Whilst Shakespeare’s text provided the solid framework, director Nina Brazier cleverly constructed an intricate web of sound, word and movement around the plot. Sometimes these elements all competed a little; sometimes music was at the fore; sometimes our attention was drawn to repeated physical gestures. It was very fluid and polished – even the challenging segue into the comedy of the third act was well managed. It was a smart move to remove the notoriously tricky production issues of The Winter’s Tale. Abrupt scene shift to Bohemia? Gone. Bear? Nope. Problem solved.

William McGeough was a fine Leontes, his descent into jealousy utterly convincing. Paulina (played by Louisa Hollway) unleashing her waspish fury at Leontes with the cast writhing at her feet was a particularly stand-out scene. Kim Ashton’s overseeing of the devised / composed score was resourceful and inventive. The inclusion of a little folksong brought a welcome warmth of familiarity and was passed around the excellent ensemble with great tenderness and craftsmanship. It is this kind of intimate care and thoughtfulness applied to all aspects of the production that makes it possible to create rich psychological drama out of the sparse branches of The Winter’s Tale.