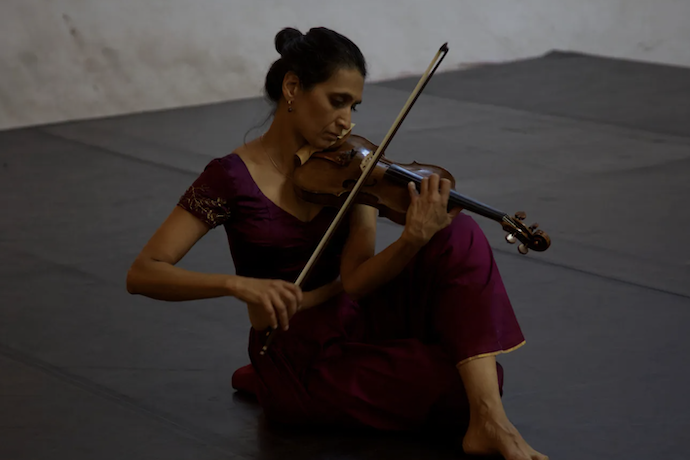 When putting together a performance for her violin and South Asian tabla duo in her parents’ home city of Calgary, western Canada, Parmela Attariwala’s father said, ‘I don’t know if we can sell it, because Indian people love to watch dance. Can you bring a dancer?”‘

For Attariwala, this was a new way of thinking. Although she had long embraced South Asian tradition in her music (both her parents are ethnically Punjabi), she was born in Canada, and her training as a violinist had been strictly classical. ‘None of my teachers ever talked about what you do with anything below your shoulders,’ says the 49-year-old musician. So her father’s words unveiled a world of possibilities – one that she has been exploring ever since.

My choreographer will say to me ‘Ok, how about you lie down and play?’

It’s a world that comes to the fore in the Attar project, initially set up by Attariwala in the mid-90s, which arrives at the Vale of Glamorgan Festival in Wales this May.  In it, Attariwala and tabla player Shawn Mativetsky fuse Western contemporary avant-garde music with South Asian rhythms and movement. Accordingly, Attariwala has been limbering up: ‘My choreographer, Gitanjali Kolanad, will say to me “Ok, how about you lie down and play? Can you stand in tree pose? Can you spin at the same time?”’  It’s just as well, says Attariwala, that she plays the violin. A larger instrument, for example, the double bass, might not lend itself nearly so well to these kinds of acrobatics.

The intention, according to Attariwala, is to get in touch with raw instinct, and thus achieve a sense of sincerity and authenticity. To this end, she also composes her music to fit the choreography, rather than the other way round: ‘There was one moment when Kolanad held a spear in a dominant way: that sensibility made me play simple, quiet music in response.’

But how much of that instinct comes across? Soundbites about music ‘moving through the body’, or ‘going where the energy is’ may sound pretty, but is there a risk that Attariwala’s physical exertions might end up distracting from her playing, or, worse, being detrimental to it? On the contrary, says Attariwala, she finds it more distracting to watch classical performers who are rigid with nerves when they perform. That’s why, in her teaching, she encourages her students to ask ‘what is my body doing?’. In her opinion, it helps to overcome self-consciousness and nerves.

What’s more, she says, moving while playing is a fascinating experiment in sound. ‘Certainly the sound for me is always coming from under my chin, because I keep my violin pretty well in position – but I wonder what it’s like for the audience as I’m moving through space. I don’t know the answer: no one’s ever told me about it. But I can only imagine it’s doing something interesting.’