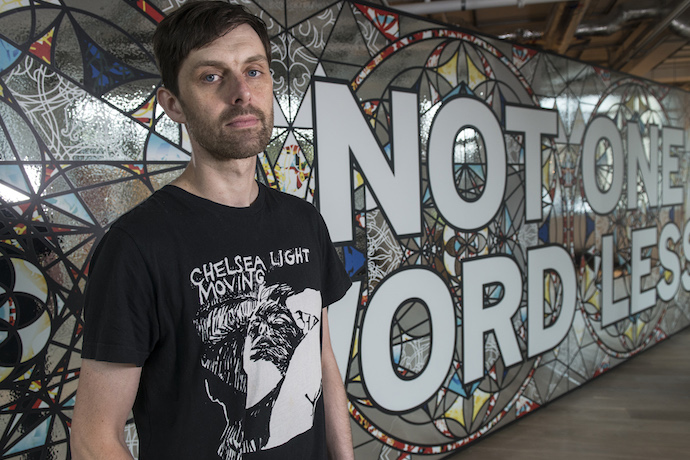 About halfway through our conversation, Mark Titchner pauses to reflect before telling me that his work ‘tends to feel more relevant when the world isn’t going so well.’ Given that we’ve been discussing the chaotic aftermath of Brexit, the galvanization of several far-right movements, and Donald Trump’s repeated denial of ‘fake news,’ this is something of an understatement. But, then again, it’s precisely this kind of rhetoric—understatement—and many more kinds too, which the Turner prize nominee has been playing with and drawing attention to throughout his artistic career.

I want to ask Titchner about his latest installation, There Will Be Two Wars (Songs of Love and War), which has just featured as a part of Spitalfields Music 2017. It was the festival’s first exhibition with a distinctly visual focus since its conception in 1976. The name of the installation was inspired by Washington D.C. post-punk band Fugazi, whose legacy and socio-political ethos inspired both Titchner and festival curator André de Ridder to think about how music and text can work together to disrupt the political order.

The two met during an artist’s residency on the Southbank some years back and noticed that the American band became a regular reference point in their conversations. After one particularly ‘nerdy’ chat, as Titchner puts it, the two of them began developing ideas for an installation. The resulting piece saw Fugazi lyrics juxtaposed with verses from Monteverdi, while panels and banners with a DIY feel to them were spread throughout the beautiful St. Leonard’s church in Shoreditch. It’s this aggressive mixing of the classical with the modern, the ripping-loose of words, phrases, and lyrics from their origins, which is what made this installation feel so relevant and contemporary. At a time when it might feel like all words in the political realm are shorn from their meanings—yet somehow retain influence—the installation asked us to reflect: why do we keep allowing ourselves to privilege words or mottos or injunctions based on the figures or groups who use them? How is it that we let these hierarchies of value persist? There Will be Two Wars (Songs of Love and War) was a means to sharpen the critical apparatuses we ought to use when confronted by adverts, political messages, and short, pithy lines of all kinds that urge us to do something or think in a certain way. By decontextualizing song lyrics and words, Titchner managed to defamiliarise them: you realise after a while it’s sometimes quite difficult to distinguish between Fugazi and Monteverdi. And this naturally gets you thinking about how readily art tends to be categorized more broadly (for example, into binaries like highbrow/lowbrow and political/apolitical).

This is a clear continuation from Titchner’s previous work. Born in Luton in 1973, Titchner was encouraged by his family at a young age to draw and make sculptures and models, which, he says, fostered his artistic development. He graduated from Central Saint Martins in 1995 to pursue his career as an artist and, eleven years later, after a successful solo show at the Arnolfini, he was nominated for the Turner Prize (2006). His early work was often comprised of found texts, which would cite philosophy texts alongside pop song lyrics—again, complicating and collapsing the distinctions between those categories.

Working across a number of media including digital print, wall drawing, video, sculpture and installation, his work continues to collect impersonal language from public spaces and reframe it in ways that render the texts peculiar, strange, or simply devoid of meaning. These repurposed texts—a nod to Guy Debord’s strategy of détournement—invite us to respond to the several meanings a word or sentence possesses. The ambiguity of the texts is what makes them both frustrating and pleasurable to read: they are almost always impenetrable, always refusing a single interpretation.

An instance of this is The World Isn’t Working, a work that seems to lean on the more satirical side of Titchner’s output. It’s been described as a ‘direct reference to the brutal Saatchi & Saatchi advertising strategy’, which was used as part of the Conservative Party campaign in 1979 that led to their election win with the slogan ‘Labour Isn’t Working’. The work is visually arresting, it grabs our attention, but remains ultimately elusive: what really is it suggesting? Is there, as the pun indicates, a serious link between people not working (or not working hard enough) and society not working more generally? Or is it an ironic take on a productivist value system, poking fun at the many reminders that we should always work hard? The slogans Titchner adopts are only a few words in length yet somehow replete with meaning; it’s impossible to finally decide on just one. But it’s this slipperiness that makes his work so effective and gets us thinking about the effects words have on us—especially when the world isn’t going so well.