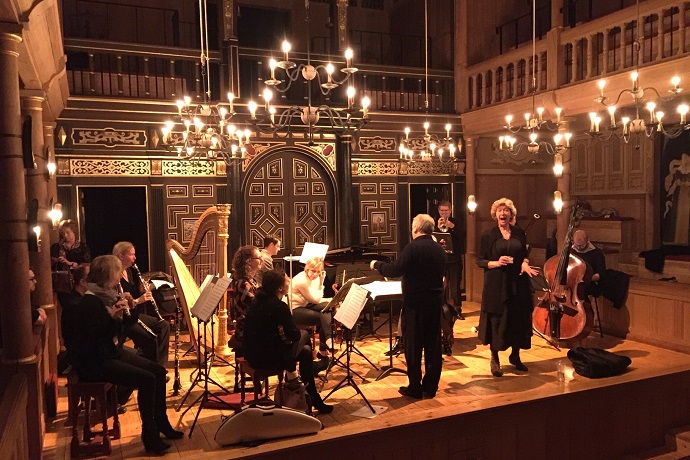 I can scarcely imagine what a Sunday in turn-of-the century Vienna would have been like without the fashionable afternoon salon concert: a refreshing and light-hearted affair. Fast-forward a hundred years to a bright winter’s day on London’s bustling Southbank, and the programme’s title, ‘The Viennese Salon’, conjures up pastel images of petticoats, hearths and drawing-room chamber recitals. Old fashioned, sometimes quaint, always exclusive.

As part of their RE:Imagine series, The City of London Sinfonia invited the audience to collectively suspend their disbelief (in spite of the warmly flickering, frescoed anachronism that is the Sam Wanamaker Playhouse) and sink into the chintz armchair of an early twentieth-century parlour  concert.

The programme was impressive, balanced and well considered. Arrangements of Til Eulenspiegel and Kammersymphonie by the roughly contemporaneous Strauss and Schoenberg opened the concert, a wonderful introduction to the competing musical ideologies of the time. Conversational and jocular playing by the strings and winds brought a delightful caddishness to the Til Eulenspiel. And the languid, expressionistic qualities of Webern’s arrangement of the Kammersymphonie were brought out through an interpretation reliant on timbral distinction. In fact – either by having a smaller venue, which exposed individual players, or a maladjusted interpretation – the general sound was one of competing performers, rather than a unified cohort. This resulting rawness, however, was not unpleasant, and the sublime clarinet solos by Michael Collins, together with the piquant barbs of sound in the Berg, made for engaging listening.

The ever-charming Dame Felicity Lott captivated the crowd with her light patter, sharing anecdotes and interpretations. The audience’s favourites were the coquettish songs by Lehar and Strauss, which received much laughter and an encore. The orchestra held itself in better stead when supporting the soprano: there was a tighter blend during the vocal works, especially during the closing scene from Strauss’ farewell to opera, Capriccio.

Ultimately, the intention to evoke a turn-of-the-century salon was convincing. This was, however, also the concert’s slight downfall: there was an enthusiastic amateurism to the playing that was helped by neither the occasionally exaggerated interpretation, nor the cloistered intimacy of the venue. That being said, I smiled from start to finish.