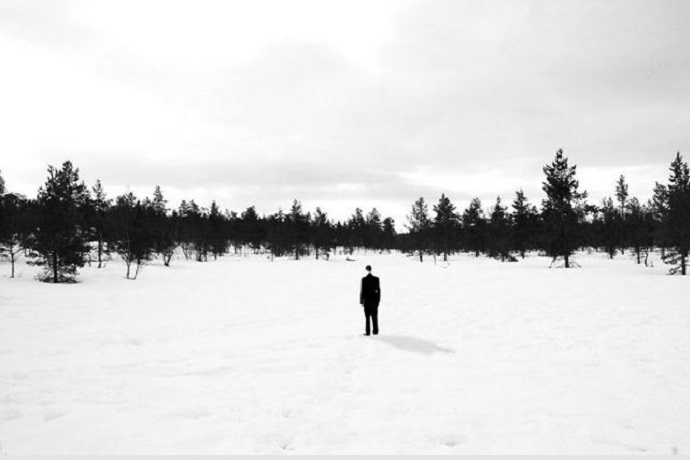 The tenor Ian Bostridge writes that the nameless, elusive protagonist of Schubert’s Winterreise ‘allows us to supply the facts’. In The Dark Mirror, director Netia Jones’s staging of composer Hans Zender’s ‘composed interpretation’ of Schubert’s original, we are taken on a quest to find them. ‘Interpretations’ like these should shed new light on their subject, elucidating without stifling it, but Jones’s and Zender’s different approaches discovered correspondingly different ‘facts’.

The birch forests and lonely blizzards familiar to Schubert’s wanderer have never been more terrifying than under the bright expressionist light of Jones’s austere, bewitching production. Trees and a Gothic-informed surtitle typeface might not have been the most radical choices, but the intensely geometric, monochrome projections cut a new dramatic plane for Schubert’s music, something Bostridge explored in harrowing and pugnacious depth. It was precisely this menace, though, that was lost on Zender, whose fiddly re-composition was more toy-town tristesse than full-blown Teutonic terror.

Bostridge’s voice has a mercurial tension perfect for Winterreise, and he is able to express the tragedy of its dashed hopes in the colouring of just a single note. His is the definitive interpretation of our time, and this performance was no exception. The Britten Sinfonia under Baldur Brönnimann were tenacious and exuberant – it was no fault of theirs that Zender’s orchestration often seemed rather imposing and, sometimes, unwelcome. Winterreise owes much of its sublime power to what is not there, rather than what is, but Zender’s kaleidoscopic scoring tried to fill in these blanks with so many special effects that the delicate ambiguities were lost and the instrumental music stayed firmly rooted to the ground.

That said, Zender’s textural whizzing from Schubertian string quartet to Schoenbergian sprechgesang and back via Kurt Weill, Mahler and a host of the composer’s other ‘heirs’ made for an enlightening journey of musical time travel. One particularly gripping moment had Bostridge, resembling Joel Grey’s MC in Cabaret, shouting at the audience over a passage of loud bangs and squealing high woodwind. The marimba – overactive throughout – might, however, have been pushing it.

Both Zender and Jones took the theatrical charge of Schubert’s music and added to it their own gloss. While Zender sometimes obscured the original, Jones’s staging, by turns expressionist and expressionless, was the perfect vehicle for Schubert’s ominous everyman.

Listen to a podcast on this Barbican production.