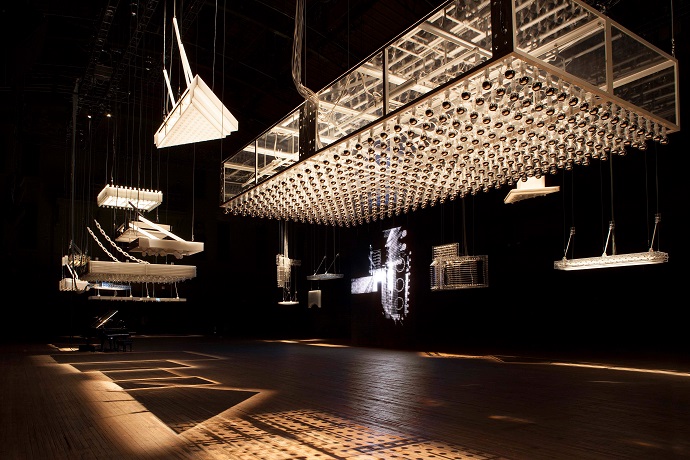 Hypothesis is French artist Philippe Parreno’s new survey exhibition, curated by Andrea Lissoni for Milan’s cavernous HangarBicocca, and the first of its kind to take root in Italy. As with similar exhibitions at Paris’s Palais de Tokyo or New York’s Park Avenue Armory, Parreno welds various of his existing works into a singular piece through a slick stream of multimedia choreography. Lighting and surround sound combine with video projections and flickering shutters, whilst an LED screen introduces us to Annlee – a manga character for which Parreno has bought the rights.

On a mandatory second visit, I arrive as a multimedia symphony is beginning to flex its muscles. Illuminated perspex structures named Marquees hang at irregular heights, crackling and smouldering to flecks of minimalist sound. Disklavier pianos sit at opposite ends of the hall, playing themselves as visitors inhabit the tract between. Some perch on blocks whilst others meander a projected trail of light. All are seemingly engrossed.

A ‘ghost portrait’ of Marilyn Monroe forms a central feature. Her subjective gaze is evoked with a moving camera, and an eerily realistic voice (reproduced with an algorithm) enumerates the contents of her New York hotel suite. From rain pattering against her window to a pen scratching on paper and a phone that rings and goes unanswered, a patchwork of sound motifs builds the tension. Similar sonic drive comes from Nicolas Becker’s pumping soundtrack in Invisibleboy – a short film about a young Chinese immigrant in New York. Becker and collaborators pastiche electro to impressionism for the exhibition’s score in its entirety, rendering the two pianos a musical hub that plays out Michael Rudy’s prerecorded MIDI track.

When, at intervals, the light switches on, silence becomes another powerful component. Another Day with Another Sun has a floodlight rove across columns and the Marquees, casting intricate shadow play across floors and walls. We are snapped into an all-blinking present in which the only detectable sound is that of the light mechanically crawling along its suspended tracks. Parreno’s Hypothesis makes a series of precise propositions: on the invisible status of immigrants or on cinema as illusion. His more elusive, absorbing hypotheses relate to the ways in which orchestrated media can combine to transform a space. As active participants, we are transformed along with it.