It feels like anything can happen in Counterflows, an annual Glaswegian festival of very different musical genres where everything blends beautifully. It is a great curatorial achievement to be able to move between so many different genres of music without losing continuity, pointing out new directions that stand between existing categories. The festival performances move in and out of improvisation, contemporary classical, jazz, rock, hip-hop, noise, beats, soundscapes, drone, pop, techno, glitch and south Indian Carnatic music.

It was the blurring of music genres and the focus on collaboration – Mette Rasmussen with Zeena Parkins and Aine O’Dwyer with Mohammed Issa Matona, for instance – that gave the 2016 festival an aura of its own. Each and every artist offered a unique approach to music making and performance. Zeena Parkins performed ‘Lace’, her scored work for electric harp, at the Centre for Contemporary Arts on Friday. The piece was an interpretation of lace patterns that Parkins had collected from across Europe, accompanied by an ensemble of improvisers. Acoustic instruments mixed with electronics, fusing rhythms with dissonances, short melodic fragments, sustained drones and bursts of intensity. 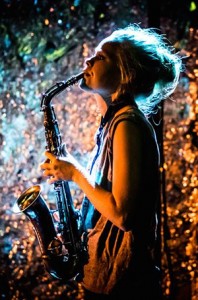 This intensity was further highlighted on Sunday in the Parkins & Rasmussen duo at the Glad Café, where Parkins’ pitch-bending noises on the electric harp beautifully matched the sheer force of Ramussen on the saxophone. Rasmussen also improvised an astonishing solo acoustic performance, walking back and forth offstage and within the crowd. She produced a loud stream of sound, broken up with shouts and mumbles that added to the physicality of her performance.

Accordionist Franka Herwig introduced the audience at Glad Café to a repertoire that expanded the sound of her instrument and the technique of the performer, while Pat Thomas engaged very physically with the prepared piano. He moved objects around inside, plucked strings and hammered keys, continuously standing up and sitting down again. The music conveyed a reminiscence of jazz with a very personal take on 20th-century avant-garde.

Every artist who performed showed the audience approaches to music rooted in explorations of the sonic qualities of their instruments, whether electronic or acoustic. The young band Still House presented works for sax, electric guitar, drums, violin and piano that were not rock music, but rather minimal fragmented melodies imbued with dissonances, noise and sparse lyrics.

Many international musicians, composers, bands and experimentalists participate in the festival, each one bringing a different sound, approach and aesthetic to the process of making and performing music. Many times I’ve heard the term ‘weird’ being used by the festival’s curators to describe the performances. This is not the word I would think of when talking about Counterflows. I would say it is physical, and fierce: a music that demands a different way of listening. Perhaps this is what makes these artists unique and their music very personal and uncompromising.