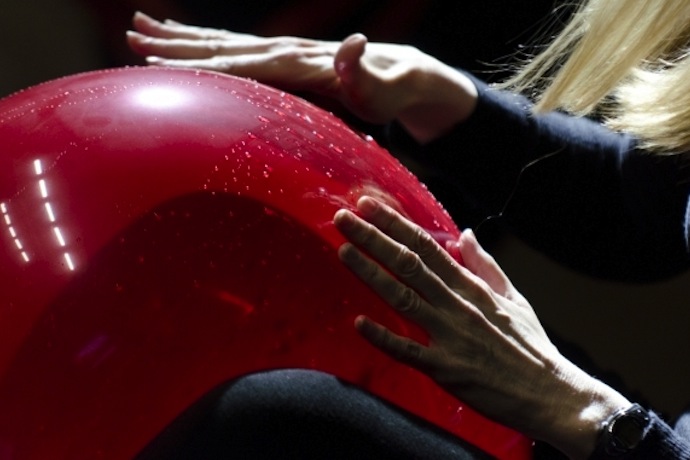 What, you may be thinking, constitutes ‘playing’ a balloon? There’s a question for the Massachusetts-based musician Judy Dunaway, who has devoted much of her life to doing just that. And last week she showed us how. In the intimate, low-lit space that is Café Oto, she took to the stage and positioned herself behind a large white balloon. This, she told us, was to be the first of her pieces, and picking up something that looked like a vibrator, she began to caress the balloon with it. The conundrum was this: the sounds that Dunaway elicited from the balloon were surprisingly complex and impressive. Yet, the sight of a straight-faced woman crouched behind a balloon stroking the latex with a vibrating white wand was funny. Very funny. I was not the only one in the crowd stifling a grin.

The second piece, or as she called it, her ‘tenor’ balloon, involved a small red character that she placed between her thighs and wet her hands to play. The layers and depth of sound she evoked from this were remarkable, through stroking the balloon to make juddering, squeaking noises, and at times the music was positively cinematic – it would have made a great horror film soundtrack. The final piece was played on a long thin balloon, again placed between the thighs, which was even more phallic than it sounds. It had an impressive range. Through twisting the balloon, Dunaway shortened and lengthened the instrument to create a variety of sounds, from shrill frantic shrieking to low, more rhythmic long notes. Fascinating and hilarious, Dunaway’s work is definitely worth exploring if you’re after something different.