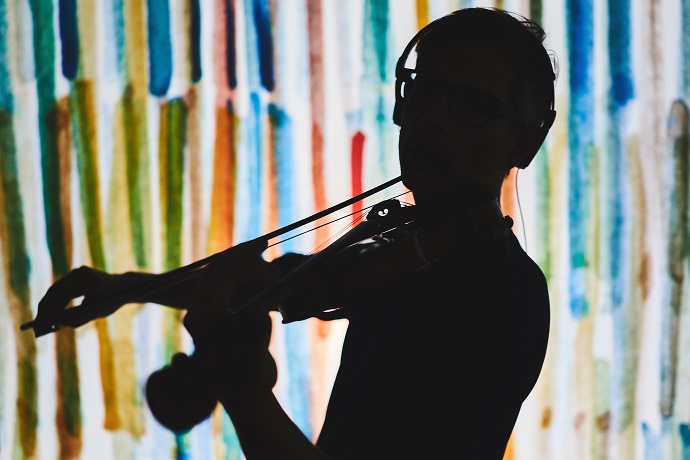 If Varmints, Anna Meredith’s debut album released this March, secured her position as a rising star of dance music, Anno, performed at the east London club Oval Space as part of the Spitalfields Summer Festival, was a display of Meredith’s supple musicality and classical heritage. Between movements from Vivaldi’s Four Seasons, Meredith and the Scottish Ensemble played short electro-acoustic responses to the idea of ‘the journey of a year’, with a backdrop of animated projections by Eleanor Meredith, Anna’s artist sister. The ensemble’s exuberant account of Vivaldi’s music had an occasional roughness that rendered its Seasons vibrant and incisive. Leader Jonathan Morton’s solo passages too were bold and crisp. It says a lot, then, that the most exciting music of the evening was Meredith’s own.

Layering Vivaldi’s racing scales and her own drum-machine cross rhythms, Meredith created febrile, mesmeric textures that stole the show and wouldn’t have been out of place in the same venue at 3am on a Saturday. And while her visuals sometimes seemed unsure of themselves when accompanying the older composer, Eleanor Meredith’s responses to her sister’s music were poised and refreshing. The relationship was at its best in the section directly following Vivaldi’s Summer, where Eleanor’s bursting, blooming shapes recalled the jubilant cut-outs of Henri Matisse and more than packed the visual punch that occasionally eluded her elsewhere. The harpsichord, electronically looped and liberated from baroque responsibility, buzzed and clattered like glitchy white noise.

Much of Eleanor Meredith’s offering seemed inspired by her work as a children’s illustrator. At its best, her use of colour and shape had a naivety that reminded me of Eric Carle’s The Very Hungry Caterpillar; an anonymous figure shuffling morosely across the screen was less successful and asked more questions than it answered about just what the animation was there to do. Apart from the birdsong passages in Spring and the odd moment of pathetic fallacy, Vivaldi doesn’t give us much to distinguish one season from another: I was expecting Anno, with its computer-generated carte blanche, to take a more obvious route, but instead the audience were free to supply their own associations to the music and images, with almost no calendrical scene setting to help them on their way. What this gained in democracy it lost in drama, and at times the identity of the piece was unclear. Anno is sharp and savvy, but could perhaps have done with a little of the grit that, in life, distinguishes one moment from the next.