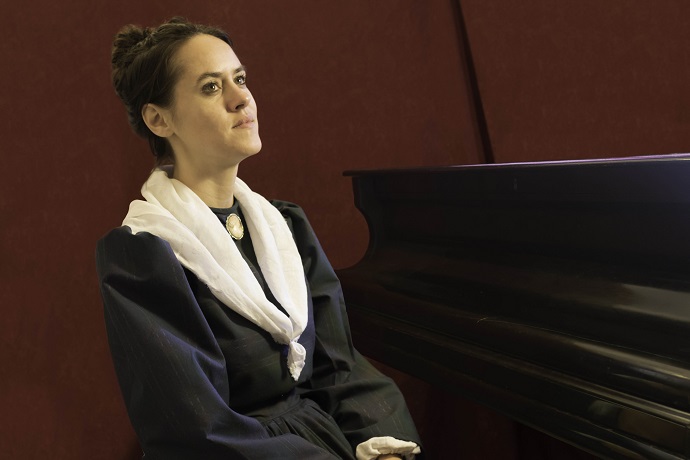 Jessica Macdonald in ‘The Tenant of Wildfell Hall’

When An-Ting Chang launched Concert Theatre, it was the realisation of a dream to blend music and theatre, which she felt are treated too separately. She saw the opportunity to create an exciting project fully combining the two, creating one form of expression. Too often we hear music in the background of a play, between scenes or to illustrate a dance routine on stage, rather than the music being intertwined with the action.

‘I love classical music, but the concert form is a bit stiff’, says Chang, ‘the performer comes in, bows, performs and the audience claps. In theatre, the lighting and the stage also help tell the story. But music often seems less important. Music is a whole language as well. So if we combine lots of parts, we can tell more about the music to the audience – I want them to feel the expression of the music more.’

The Tenant, which uses Anne Bronté’s The Tenant of Wildfell Hall as its base, will be Chang’s third production for Concert Theatre, but each project has been quite different, emerging in its own way. Feeling strongly the storytelling element of music, she finds ways to link musical and dramatic works which would otherwise seem worlds apart. Her project, Kiss of the Earth, incorporates Romeo and Juliet and Stravinsky’s The Rite of Spring. ‘When I read Romeo and Juliet as a child, I was grabbed by the feelings of hatred which run through it. I feel it’s very violent – something which I also felt when I played The Rite of Spring. I was struck by the similarities, even the comedy and tragedy and the way the first part of the Rite is light and the second dark.’ She describes Kiss of the Earth as a ‘physical theatre piece,’ also influenced by Jacob Lecoq’s physical theatrical training style.

Music often seems less important [in theatre] – I want audiences to feel the expression of the music more.

An important part of the process of a new production now is the Research and Development week, funded by Arts Council England, where a team of actors, a producer, a designer and a pianist work together from the outset, not with the aim of creating a performance but just to have an opportunity for everyone to bring some ideas in and experiment to see what works. ‘There is so much push and pull and you have to see how you react emotionally as well as how you play,’ Chang says. ‘It’s like a collision – if it’s successful, new molecules come out and there’s new expression. There are rhythmic, articulation and phrasing collisions which combine with actions and texts.’ 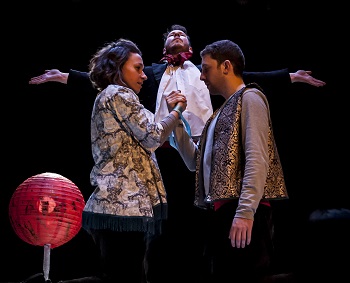 Concert Theatre’s most recent production, ‘Kiss of the Earth’

The Tenant will be an immersive piece, and Chang is particularly excited to have the opportunity to stage it in galleries and museums across England, giving the audience a more inclusive experience of her work. ‘It’s also important for this work because the heroine in The Tenant of Wildfell Hall is a female artist,’ she explains. The gallery room will be the stage for her audience, so they have the opportunity to ‘join’ the artist at work.

Again, the music chosen for the production links to the text in a personal way for Chang. ‘With the mysterious tenant in the first part, I start with Scriabin’s music, which to me is always mysterious – the colour is romantic, but it’s quite dark. Then for the middle part, the diary of when she was young, I hear Mozart’s naïve music.’ When things develop passionately into more troubled times, Chang weaves in Brahms’ Rhapsody op.79 before incorporating more of the Scriabin and Mozart to reflect the sentiments of the characters.

Actors, musicians and audiences alike seem to embrace this new style of art. Chang can’t see why theatre still can’t accept a production where music is heard for what it is, without it being accompanied by stage work or just filling a gap. Concert Theatre allows for moments of just music, just text, and a beautiful coherence of the two.