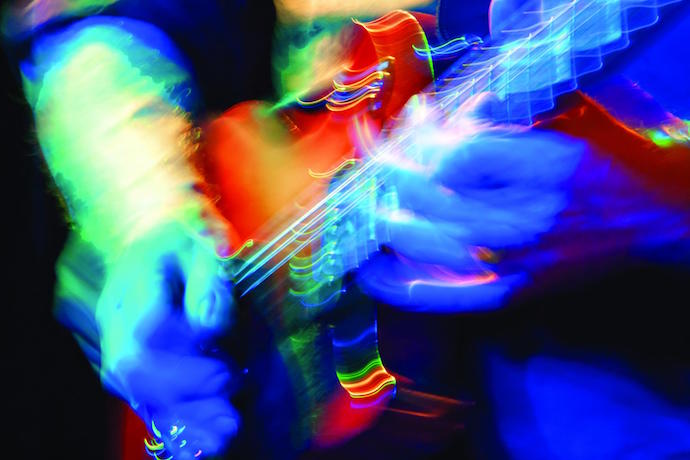 Psappha are a stalwart of the Manchester contemporary classical music scene, having been active for over 25 years. Here they presented a programme that mixed two scores for the ensemble alone and two with improvising soloists.

Fausto Romitelli’s’s ten-minute Amok Koma raised the curtain on proceedings. The composer’s starting point was ‘a very simple idea: that of the repetition/degradation of material’. That material seemed to consist of three glittering chords and, as the programme notes suggested, they were gradually warped over the course of the piece. Exactly what processes were at work remained elusive, though. The music alternated crystalline clarity with slippery microtonal murkiness and with the repeated return of versions of the opening gesture we returned to a place that was almost familiar only to strike out on stranger and more circuitous paths. It was a dark, dream-like experience.

Anna Clyne’s Wonderful Day, part of a group of works titled Chicago Street Portraits, took a field recording of stranger singing on Chicago’s Magnificent Mile and very simply and sensitively harmonised it for the live ensemble in a similar manner to Gavin Bryars in his iconic Jesus’ Blood Never Failed Me Yet of 1971. The recording also incorporated spoken biographical snippets from the stranger (revealed as the elderly Willie Barbee), whose rhythms fleshed out the piece as well as the person.

Mike Walker is a jazz composer and guitarist and it was his Autonomy that recieved its world premiere tonight. A kind of chamber guitar concerto, in which Walker himself took on the solo role, the piece was an attempt to add jazz-like spontaneity to a classical setting and the results were not wholly convincing. Walker writes that he wanted to ‘write something that would explore the possibility of improvisation, re-interpretation and a freedom to choose whether to play written material or not’ but the result came across as an inconsequential string of polite jazzy vignettes. The solo part was wholly improvised and perhaps could have provided some sense of continuity but I found Walker’s playing rather hesitant and constrained. You sense that if the players had really cut loose something more interesting would have resulted and perhaps this is something that will happen as the players become more familiar with the workings of the piece.

Steven Mackey’s Deal is also an attempt to draw together disparate strands and he manages rather more successfully. Here we had two improvising soloists, Walker on guitar and Mike Smith on drums. Their parts, although improvised, are very much guided by the composer with detailed outlines whilst what the ensemble plays is fully notated. The other layer of the piece is a tape part featuring sounds from the ‘real’ world in an attempt to highlight the commonality between the various musics hinted at. In the words of the composer, ‘compared to a barking dog and a ringing phone the electric guitar and chamber ensemble have more in common than the labels “classical music”, “jazz”, “rock”, and “world music”, ordinarily allow. The success of the piece was down to the sure handling of the ensemble which had certain cumulative thrust to it, as well as to the clear trajectories taken by the soloists, whose playing here seemed freer and more coherent at the same time. Mike Smith’s kit playing in particular added a dynamism lacking in Autonomy and rather than arriving at an indifferent truce between different styles of playing, this piece fused them to make something occasionally strange and always compelling.