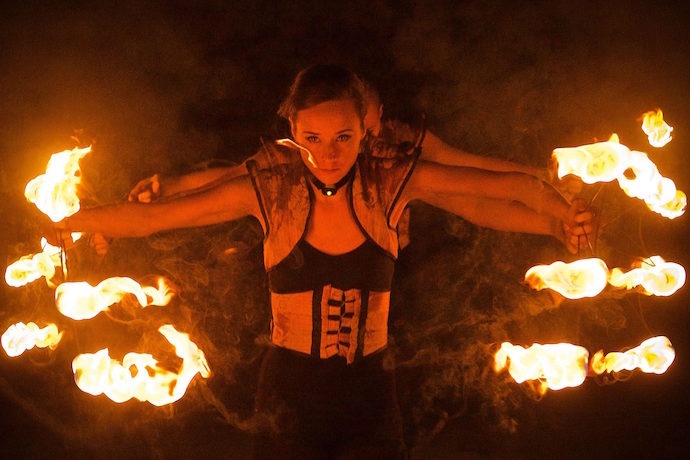 You are given a mask. You are told to follow the light. And, guided by the three Furies, you do. Along the river Styx you go. There’s Charon, too: the ferryman who carries the souls of the recently deceased towards the underworld. This Charon (literally, ‘of keen gaze’, referring to his feverish eyes) is impressive looking, a kind of steampunk version of Hades’ ferryman. Deep in the darkness you see lithe Charon lead a lost soul away—his eyes aglow.

But lead them where? To the back of the room, which is not very large. In fact, it is quite small. And, before long, you’ve already been led to the far end of the performance space—and back again. There is only so much to-ing and fro-ing you can do before the illusion starts to break, even when the Furies are doing their best to retain your attention as you progress from sequence to sequence. They beckon you, they sniff you, they invite you to interact. But no one around you really does. In contrast to the twirling and whirling performers, the audience is a bit… limp.

What is Becoming Shades? It’s difficult to know, really. For producer Ilai Szpiezak, the show is ‘without doubt, a new vision of immersive theatre.’ Unlike ‘a typical circus performance, the audience is in fact the centre of the show’ so as to forge a ‘closer connection and an intense atmosphere’, very much lacking when I visited. ‘The story of the show is led by a narrative element’ Szpiezak notes, a tautology that ought to raise a fair amount of suspicion. Whatever the ‘narrative element’ in Becoming Shades is, it is about as obscure as the underworld it attempts to evoke.

Director Laurane Marchive, meanwhile, describes Becoming Shades as a ‘fusion of operatic vocals over heavy electronic beats with [sic.] lynchian moments and badass circus.’ The trouble with referring to David Lynch’s aesthetic in this way is that you end up comparing your work to the work of the person who mastered that aesthetic. It’s not usually an advantageous point of comparison. The ‘fusion’ that Marchive speaks of feels a little fetishised, as if to imply that, by being a fusion of various things—a ‘symphony of live music, physical theatre, aerial acrobatics, fire, dance and mime, all tied together through immersive theatre’—the sum of these parts contains an intrinsic value.

The choreographed sequences—throwing and spinning fire, pole-swinging, dancing with the help of sashes from the ceiling—were enjoyable in and of themselves. There is no doubt that the artists of the Chiravee Circus are special, talented performers. At times, they make you gape with impossible motion. But it’s like seeing a great performance from an actor who deserves to be in a better film. You go away hoping that their skill and artistry will be showcased better in the next production.