Featuring local musicians from across Australia, Black Arm Band aims to bring together the music, language and heritage of indigenous communities. Native Australian author Alexis Wright, famous for her novel Carpentaria, has written words to be sung in eleven different languages, while Daybreak Films provide a backdrop of visuals and film illustrating the communities’ everyday lives.

2. Schubert through the Looking Glass

ZRI, which stands for  Zum Roten Igel or the ‘Red Hedgehog Tavern’ (a public house in Vienna where Brahms would drink and listen to gypsy musicians), is a collective that re-scores classical composers’ works to embrace the ‘other’ in contemporary musical culture. Taking marginalised musics, such as Jewish klezmer or Hungarian-Roma fiddling, ZRI emphasises the eastern European influences in Viennese composers’ works. This year at the Honiton Festival, ZRI will be performing a ‘gypsified’ version of Schubert’s monumental Quintet in C, as well as some merriment of their own devising.

The Brighton Festival is an annual celebration of the inventiveness in music, dance, theatre, film and more, with previous guest directors ranging from the electronic musician Brian Eno to one of Britain’s most famous contemporary authors, Ali Smith. One highlight this year is the UK premiere of Laurie Anderson’s Music for Dogs – a piece designed specifically for the canine ear. Then there’s the guitar and feedback-loop installation ‘Lou Reed Drones’; and ‘Moments of Weightlessness’, in which the exposed belly of a piano becomes a metaphor for motherhood.

A new twist on Winterreise, Schubert’s cycle of 24 songs about a lovelorn wanderer’s winter’s journey. Hans Zender’s orchestral reimagining of the cycle sees the minimal piano soundscape transformed into something far more intricate, expressionistic and rhythmic, showcasing the singing of tenor Ian Bostridge, and direction of the imaginative video artist Netia Jones.

As part of the Wandsworth Arts Fringe, Addictive TV will be presenting a one-of-a-kind technological artwork. The performance piece comprises 200 individual musicians from different parts of the globe, who have been streamed, sampled and spliced into a collaboration of strangers. The result is the Orchestra of Samples.

Royal College of Art, London, May 13 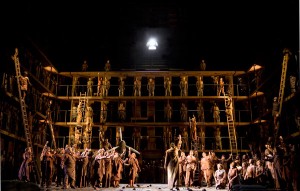 Embracing unconventional venues, digital and street theatre, the flamboyant Catalan theatre company La fura del Baus have been performing immersive and interactive theatre for thirty-five years. Their take on Oedipe by the Romanian composer Enescu is likely to be something of a modern day Gesamkunstwerk. 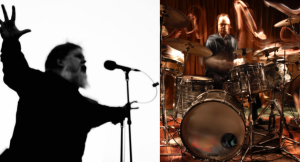 Slam poetry meets experimental music at the Cockpit Theatre, where David Lee Morgan and Charles Hayward rattle a few bones. As a multi-award winning poet, David has featured in festivals across the English-speaking world, while Charles – through his project EXPLODING DIAGRAM – has long been exploring the boundaries of avant-garde jazz, electronics, improv and percussion. This looks set to be a noisy, politically charged fusion.

The Cockpit Theatre, London, May 24

The Royal Opera House takes on 4.48 Psychosis, a study of clinical depression and the last play written by Sarah Kane before her suicide. Philip Venables’s interpretation of the piece blurs the genre lines between opera and theatre, while highlighting the original’s unconventional lack of formalised characters, setting and directions with a brutalistic musical backdrop. Richard Baker conducts.

Aged just 25, painter Paul Nash joined the British Army within weeks of the First World War breaking out. His depictions of life on the front line clearly reflect the horrific experiences he endured in the trenches. Now they have inspired the illustrator, filmmaker and musician, Dave McKean, whose new work Black Dog: The Dreams of Paul Nash combine these paintings with live music, visuals and text in a series of multimedia reactions to the Modernist painter’s recorded experiences.