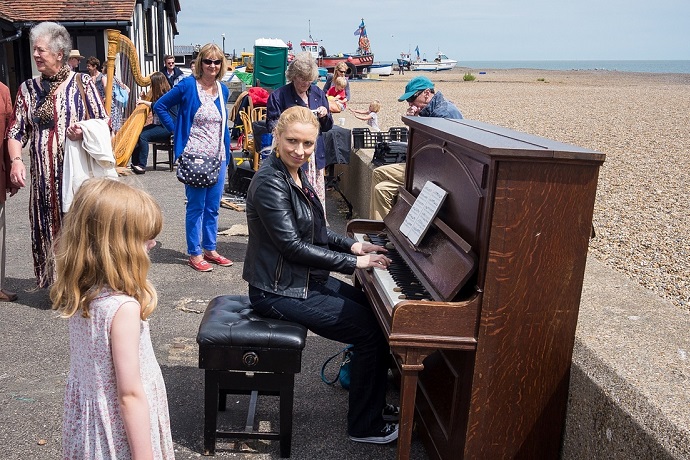 The concept behind Musicircus, to be performed by the Aurora Orchestra at London’s Kings Place in March, is a simple one: groups of any type are invited to perform simultaneously whatever they like, in a production that lasts several hours. The number, type and size of the groups is open to interpretation, ranging from solo harpists and string quartets to brass bands or bell ringers.

Except Musicircus is not really as straightforward as that, considering that the piece was conceived by perhaps the most influential American composer of the 20th century, John Cage. Cage is most renowned for his provocative piece 4’33” (1952): a three-movement work for any number and combination of players, in which Cage instructs the performers not to play their instrument for the duration of those four and a half minutes. It is not a work of silence, however, as the ‘music’ comes from the unintentional ambient sounds – the cough, the fidgeting of feet, the quiet hum of air conditioning.

Although in Musicircus the groups perform something far more familiar as ‘music’ than 4’33”, again Cage leaves it up to chance what sounds will be heard. The players are given free rein on what, when and how they perform, resulting in random music combinations. Meanwhile, spectators are encouraged to wander freely between the different performers; they may choose to single out one in particular to listen to, but may equally take in the general buzz of the different groups playing simultaneously.

Both Musicircus and 4’33”are manifestations of Cage’s interest in what he called ‘chance operations’. By relying on chance rather than giving specific instructions, Cage aimed to negate the composer’s will and write works ‘free of individual taste and memory’. Unsurprisingly, not all composers took to Cage’s aim of curtailing the composer’s authority over their own work, with the Greek composer Iannis Xenakis describing Cage’s music as ‘an abuse of language’ and ‘an abrogation of a composer’s function’.

The assumption of Xenakis and other critics was that Cage had, in his ‘chance operations’, given up all prerogatives as a composer. Yet Cage still sets up specific boundaries: 4’33” must last four and a half minutes without the performer intentionally making sound; and Musicircus must involve a variety of musicians who should play whatever and however they want. In setting up these frameworks, Cage provided an outlet for the chance creation of interesting and new sounds, which would be impossible for a composer to produce on their own. While he may not have explicitly composed the sounds heard in such random compositions, Cage did at least provide the conditions for them to happen.

Musicircus has remained popular since its premiere in 1967 and, while performances of it have been frequent, they have had a mixed reception. At the UK premiere in 1972 at the University of Birmingham, Dominic Gill of The Financial Times described the work as ‘a good, clean, unpredictable bore’, whereas John Falding at The Birmingham Post was more sympathetic, characterising it as ‘occasionally exciting, frequently interesting, and always fun.’

Reviewing Musicircus is redundant, however, given that the nature of the work means that each performance is vastly, even unrecognisably, different. It depends upon the kind of performers that assemble, what they decide to play and when, as well as numerous other variables that Cage does not specify. Even spectators at the same performance will have considerably different experiences, depending on what they choose to listen to or what their ear (intentionally or not) picks up.

Nevertheless, there are certainly better and worse performances of Musicircus. Would it work as well if only three groups turned up, or if all of performers were string players? When a performance was planned in London in 1972, Cage advised using the greatest possible variety of performers. Whether it is successful is down to the spectator, too. While it may be tempting to concentrate on a performer you particularly enjoy, it may be more beneficial to wander freely between groups, to hear the mix of different music and marvel at how you – and you alone – are hearing a combination of sounds that have never been put together before and never will be again.

But, to instruct someone on how they should listen to Musicircus is not in keeping with Cage’s aim. The beauty of Musicircus comes from the performers’ freedom to do whatever they want. At Kings Place on 19 March, the musicians of the Aurora Orchestra will be scattered around a small hall, complete with a bar, and audience members will be invited to buy a drink and ‘rub shoulders’ with the artists. According to Cage, the piece ‘should be fun’, and he is well aware that it is impossible for him to dictate how this should be achieved for each individual. The directive to have fun at least gives us a clue as to how Musicircus should be done properly: whether you participate as a performer or as a spectator, do at least make sure you enjoy yourself.