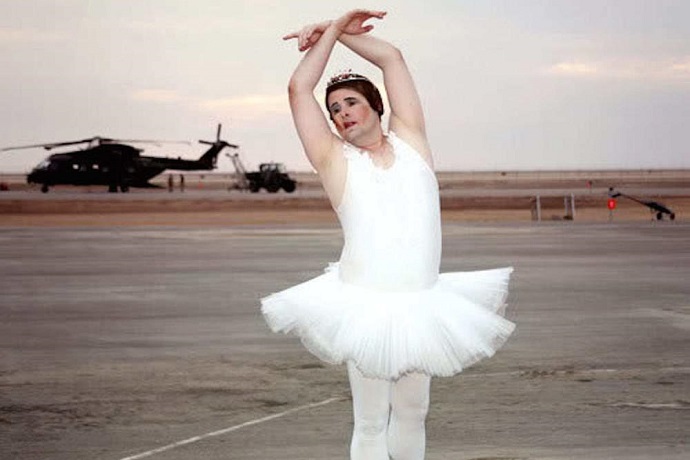 Iestyn Edwards’ career has played out like a romantic comedy of errors gone spectacularly right. He is the son of a failed stage psychic and ‘phenomenal yodeller’ (in his words), who as drag-ballet artiste Madame Galina became a mascot for 42 Commando Royal Marines in Afghanistan, and embarked on an unlikely friendship with a forbidding Corporal known as Stacks.

Growing up in London with his ‘mad Welsh family’, Edwards was no stranger to the bizarre and comedic. He performed on stage from the age of four with his father, alongside Vaudeville psychics and magicians. A taste for the surreal, he says, ‘went in by osmosis’. His classically trained mother tried to take her psychic ability onstage, ‘but that went a bit wrong’. He has had to avoid some of his parents’ traits, learning ‘not to be a complete cow like she was, or too laid back like he was.’ Edwards elaborates: ‘If you’ve got the talent dad had, you’ve got to push yourself and just go and do things.’

Corporal Stacks compares Madame Galina’s arrival in Iraq to being beamed down from the Starship Enterprise, ‘except Scotty’s really fucked up the coordinates this time.’

Crass, camp and quick witted, Galina is based on notorious ballerina divas, but Edwards’ maternal grandmother and Aunt Sophia’s ‘unconscious comic genius for description and creating character’ have inevitably rubbed off.

Despite the eccentricities of his family, the classically trained singer acknowledges that Galina was ‘kind of left field.’ Sitting back in his chair, ruffling his silver hair, he reflects that the diva ballerina came about as ‘a response to Bryn Terfel’, with whom he studied at the Guildhall School of Music & Drama. When the students heard Terfel sing, he says, staff had to replace the registration form outside the student councillor’s office: ‘I swear it went from a piece of A4 to what was like a kitchen roll because of the number of people who were traumatised that there was that kind of talent.’ But, as Edwards explains, ‘You had to forget about [him] and concentrate on what you were doing!’ 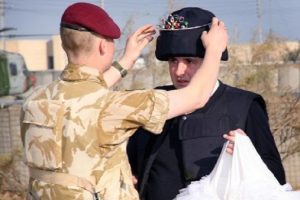 Edwards in the Combined Services Entertainment

And he did. Having befriended an ex-ballerina at the Royal Opera House whilst selling programmes as a 20-year-old student, Iestyn practised pirouettes at his home in London. The ROH was fertile ground for inspiration and, following a series of fortunate events, Galina started climbing the greasy pole to stardom, bringing down the house at Club Kabaret. Media accolades followed, as well as invitations to sing at the Royal Maritime Museum and the dinner marking the 200th anniversary of the Battle of Trafalgar on HMS Victory, watched over by the Queen. Then came an audition for the Combined Services Entertainment, and, in 2006, Iestyn was flown out to Iraq for the first time. It must have been a relief to see the familiar face of the formidable Corporal Stacks, who had seen Edwards sing at the Battle of Trafalgar anniversary. Stacks compares Madame Galina’s arrival in Iraq to being beamed down from the Starship Enterprise, ‘except Scotty’s really fucked up the coordinates this time.’

As a fan of ‘the arts’ with an organ-playing grandmother, Stacks had been put on liaison duties with Combined Services Entertainment. His senior ranking, however, failed to stop Galina ridiculing him on stage, resulting in her being hoisted atop a tank and made to serenade the Corporal with his favourite songs.

Edwards gleefully admits he and Corporal Stacks are an odd partnership: ‘He’s a bastard. He’s a front-line marine. He gets upset when I call him a people-killer.’ But Edwards acknowledges that it’s ‘because he deals with death the whole time’ that Stacks offers such great advice and remains a close friend. He also features heavily in My Tutu Went AWOL, which documents Galina’s four tours to Afghanistan and Iraq and will be published this summer.

Hopefully, Edwards says, releasing My Tutu as an audiobook will catapult him onto new comedy platforms, like BBC Radio 4’s Just a Minute or Quote/Unquote. Having started blogging last September, he has been encouraged by Stacks and a radio producer to develop his own show based on his farcical anecdotes, which will be on the airwaves soon. In the meantime Galina can be seen at the Aldeburgh Festival on 25th June and at various Pimms-and-pirouette parties across the home counties.