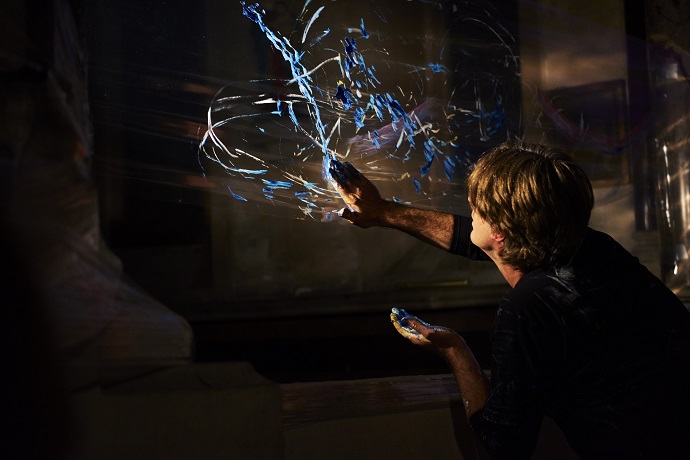 How do music and visual arts interact? This was the question being explored in a packed evening of films and performance art at Wolfson College, Oxford. Cindy Keefer, director of the LA-based Center for Visual Music, presented an array of kaleidoscopic visuals and sounds from their film archive, followed by a ‘digital painting’ performance with live improvised music by artist Mark Rowan-Hull and musician Christopher Redgate.

The hand-painted and digitally animated abstract films, dating from 1947 to the present, were hypnotising. ‘Polka Graph’ by Mary Ellen Bute, an American pioneer of ‘seeing sound’ films, was one of the earliest films shown: the bright colours and rhythms of her animation illustrating the sounds of Shostakovich’s Polka from his Golden Age suite.

It was fascinating to see the earliest ‘visual music’ films presented alongside later works, and compare threads of influence. Jordan Belson’s film, Mandala (1953), was a rich display of rhythmically interactive colour and sound, with swirling circles keeping time with an eastern-influenced musical score. Bret Battey also alluded to the influence of Belson’s films in his audio-visual artworks, responding to the centred, symmetrical nature of Belson’s work. In Battey’s Clonal Colonies (2011), networks of tangled webs unfurling, unravelling, knotting and distorting were accompanied by a disjunctive, electric score of ensemble music underplayed with electronic sounds. There was a sense of urgency which seemed unusual for an abstract art film.

A highlight was Steven Woloshen’s Shimmer Box Drive (2007). Woloshen installed a small box in the front of his car back in 2003, and over the next four years scratched, doodled, painted and scribbled his expressions and thoughts directly onto the film reel inside the box, while stuck in traffic. It was a rapid, colourful and fast-paced short film accompanied by an explosive drum solo. I’ve never felt abstract brush strokes convey emotions in this way before.

The word ‘salon’, however, encouraged me to anticipate an interactive, casual space. The creative, informal nature of the evening was calling out for a smaller, darker space, like an underground club. Instead, it was held in the vaguely sterile environment of a newly built – and almost empty – auditorium. Nonetheless, the evening was a fascinating introduction to an art form that blurs the boundaries between image and sound.