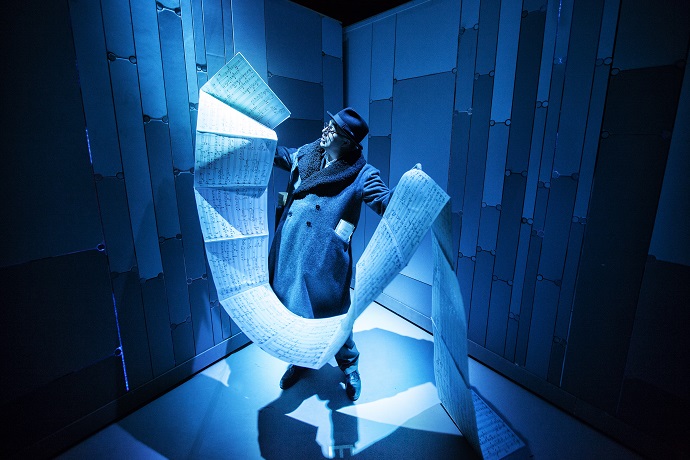 The latest find in the Copenhagen Phil’s indefatigable search for creative alchemy among its home city’s alternative arts scene saw it set up shop at the black box that is Teater Republique in Østerbro, Copenhagen’s Islington. The 11-day run of Ildfuglen – a collaboration between the theatre, orchestra and dance outfit Dansk Danseteater focusing on Stravinsky’s The Firebird – sold out over a month before it opened on 12 January. Someone somewhere spread the word that this was going be quite a show.

Director Martin Tulinius describes his project as a gesamtkunswerk, but in reality it is a monologue welded onto the front end of performance of the ballet, in which the former segment feels awkward, irrelevant even. Jens Jørn Spottag’s portrayal of Igor Stravinsky as a fusty middle-aged man doesn’t square with what we know about the composer’s gait and character, nor his image at the time of the three ballet scores for Diaghilev. Perhaps that isn’t the point – I’m sure the neatly communicated (and more accurate) insights into Stravinsky’s musical mindset would have been useful for a good number in the audience.

The trouble, though, is in presenting such an off-the-shelf view of a ‘classical composer’ – and in relatively tired dramatic language, despite some kooky tricks – when what follows is so powerful, so serious and so uncompromisingly modern. Tim Rushton’s choreography, enacted by members of the Dansk Danseteater, is so very evocative: twisting and lolling during the score’s kaleidoscope opening; piercingly angular during its conflicts and oozing sexuality during its dripping, coital dances.

Elena Martinez Ibar dances the firebird as a complex leather-trousered woman, fearless yet wracked by self-doubt – an uncanny marriage of something folkloristic and fantastical to a current urban reality. Technically her dancing is virtuosic; facially she communicates with an actor’s detail. Four moving walls with protruding stumps allow the company of eight to climb, straddle, tower and hang in contorted shapes. Detailed projections transform these walls into anything at all; in one alarmingly brilliant passage, the audience came to realize that each wall was hanging with the strange fruit of awakening human bodies. Behind all that, the Copenhagen Phil was all burnished brightness and sharp edges under Stefan Asbury, thrusting out the score’s final snarl as if to chase everyone from the room. Poleaxing, heartening and absolutely new. It should be revived elsewhere, when somebody’s re-thought the first half.