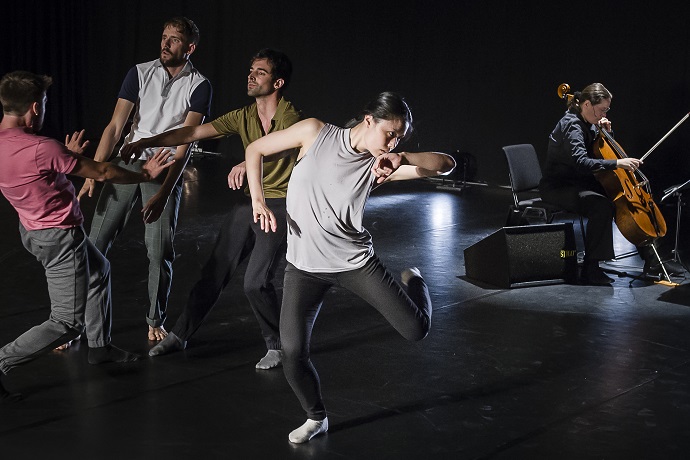 At a disused public transport depot in an unfashionable district of Berlin, Taiwanese choreographer Shang-Chi Sun and chamber group Ensemble KNM Berlin presented spur, a new dance-and-music work based on the music of Austrian composer, Beat Furrer. A serious and high-minded figure of European contemporary music, Furrer is also the conductor and founder of Klangforum Wien, through which he champions the music of fellow avant-gardists Helmut Lachenmann, Enno Poppe and Wolfgang Rihm. Furrer is no stranger to music theatre, having already written six operas. A seventh, Violetter Schnee, is due to be premiered in Berlin in 2017.

In spur, Shang-Chi and Ensemble KNM Berlin have created a narrative piece from two pre-existing solo instrumental works: Solo for Cello, and Phasma for Piano. A quartet of dancers weaves around and interacts with two musicians: cellist Ringela Riemke and pianist Frank Gutschmidt, both experienced performers of Furrer’s music. Furrer’s virtuosic and micro-detailed works require a compendium of extended performance techniques to elicit an extraordinary range of sounds from both instruments. They are also gruelling and mind-bending feats of endurance. Riemke and Gutschmidt rose to the challenge, giving astonishing and powerful performances.

It was a shame, then, that these were often drowned out by Shang-Chi’s frantic choreography. Both Furrer’s pieces are small in stature, if not scope, and make subtle use of silence and extreme quietness. But, notwithstanding the breath-taking, mellifluous solos from Samuel Déniz Falcón and Ying Ting An, the dancing often strayed into noisy farce. Shang-Chi’s choreography was maximalist and infested with brash, pop-art realist tics: panting and sexual simulation fuelled with masculine lust; group selfies portraying vanity and narcissism; children’s clapping games baldly evoking the cruelty of the playground.

Furrer’s work is attritional: long and repetitive with little sense of melody, harmony or conventional structure, it makes for challenging – but rewarding – listening. Shang-Chi’s choreography, on the other hand, is brash and confrontational with an impish sense of humour. In spur, this trampled over the subtlety and intricate craft of Furrer’s music.