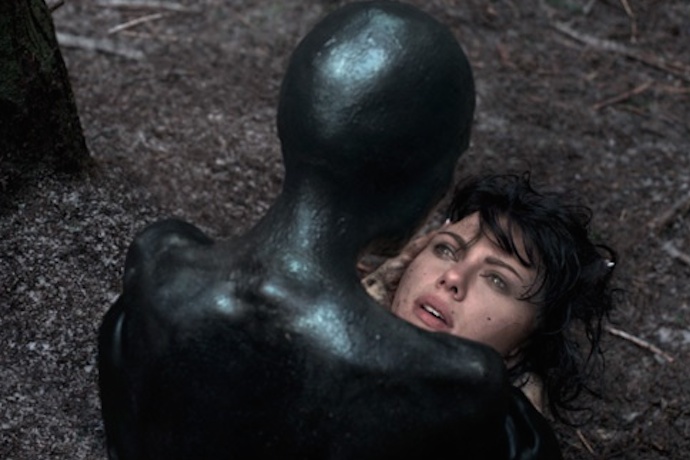 When I first watched Jonathan Glazer’s Under the Skin shortly after its 2013 release, I was struck by the powerful otherworldly quality of Mica Levi’s score. In the film, an alien takes the form of a young woman (Scarlett Johansson) cruising the streets of Glasgow for men. But my question at the Royal Festival Hall this time round was, would a screening of the film with live musicians create an enhanced, immersive listening experience? Or would the intimate and transformative magic of live music be lost in slavery to the film?

Unfortunately, on balance my conclusion is the second. The ensemble from the London Sinfonietta was amplified and their sound delivered to us mixed live with midi strings by Sound Intermedia. The effect was less personal than having live acoustic musicians, and the sound often less integrated and dense than a high-quality string ensemble could have delivered. On the other hand it also lacked the detachment, mystery and ethereal quality, as well as the density, of the original track. Surely delivering one of the film’s main themes, the alien’s hunger for men, through midi rather than a live drummer was a missed opportunity.

That isn’t to say I didn’t enjoy the evening. I find the strangeness of the film, following the journey and awakening of an alien being, eerily fascinating. Starting out as a cold predator, Johansson discovers some of the most basic human instincts: curiosity, empathy, desire and fear. She displays both a disconnection and fascination with life, with accompanying music that is undeniably effective.

With a sold-out auditorium and a young audience, this event presented itself as a chance to make a live classical music event relevant to new listeners by connecting it to popular culture and social ritual. However, this was not achieved.

Jonathan Glazer described the music as the alien protagonist’s ‘blood’, stressing the importance of the score, but for a live performance this work needed further adaptation, with an equal role for music and film. The quality of both the musical and visual material is high, and the London Sinfonietta is a first-class ensemble. But for real effect, a larger ensemble, with freer and expanded musical material, could have delivered something truly original and moving.

The film is strange and fascinating, and I’m excited to hear future work from Mica Levi, but was this a live-music event, or simply a film screening? The noise in the auditorium during the film credits, when some of the most interesting music was playing, suggests the audience weren’t completely sure.