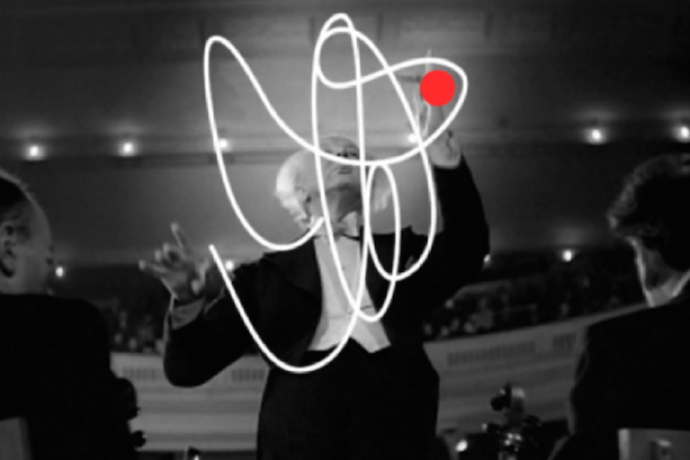 Music and visual art have a porous relationship. Wassily Kandinsky depicted his encounter with Schoenberg’s music with a surge of bright yellow in the 1911 painting Impression III. Morton Feldman’s Rothko Chapel (1971) captured in sound the intense, ethereal quality of the great abstract expressionist’s art.

Composers like Stockhausen and Cage went further, reinventing the musical score into eye-catching documents that mask their instructional purpose behind elliptical symbols. Such ‘graphic scores’ often possess their own artistic worth. Scores, a recent exhibition in Berlin, exhibited new ‘scores’ by four visual artists as artworks in themselves, alongside a series of concerts featuring their musical realisation.

The artworks in Scores approached the idea of musical notation in different ways. The curved, interlocking forms in Jorinde Voigt’s Song of the Earth had a melodic quality – the drawings were pockmarked with scribbled timings, arrows and instructions that provide a road-map for musical interpretation. Christian Marclay’s To Be Continued had a more playful link to the musical score, using the visual accoutrements of notation – notes, rests and the five lines of the stave – in a comic book full of mischievous pop-art collage.

In Who’s Afraid of Sol La Ti, Ari Benjamin Meyers drew parallels between the musical score and performance art, especially the Instruction Pieces of Sol LeWitt. Following LeWitt’s lead, Meyers’ piece consists of a set of instructions for the creation of a musical work: a composer and performer take a brief theme written by Meyers and create a new work from it every day for the duration of the exhibition.

In Berlin, the piece was realised by composer Wojtek Blecharz and recorder player Susanne Fröhlich. The resulting fifteen works were performed in a concluding concert that was a Herculean feat of memory, as the score for each piece – projected onto the walls of the exhibition – was part erased at the end of each day. Blecharz’s pieces were spare and haunting, whilst Fröhlich’s mastery of contemporary recorder practice was stunning.

Behind Meyers’ instructions lay a scenario that demanded Zen-like focus and concentration from his performers over an extended period of time. As such, it cruelly exploited the unequal power relationship between composer and performer. Nevertheless, it was thrilling to see the mechanics of artistic creation and the hard graft of creative work.

More from the Hamburger Bahnhof: