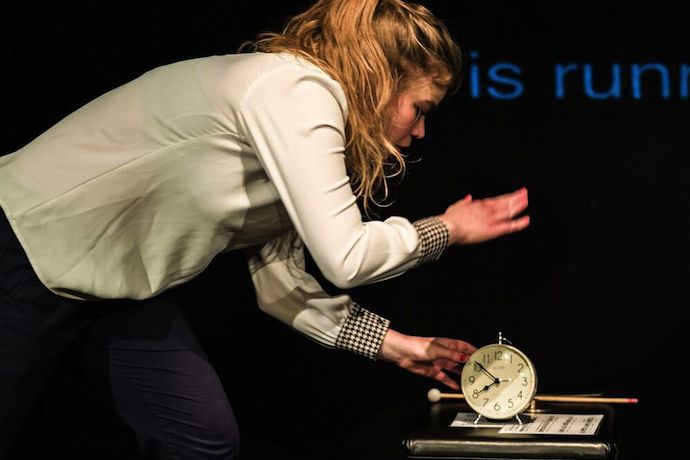 Soprano Héloïse Werner in ‘Scenes from the End’

Grief and loss are the principal themes considered in this strange and abstract one-woman opera. Soprano Héloïse Werner acts out her grief through vocal acrobatics and percussive techniques in this triptych piece, mourning the death of three things: the end of the universe, the end of humanity and the end of a single human life. Written and composed by Jonathan Woolgar (winner of the 2010 BBC Proms Young Composers’ Competition) and directed by Opera North’s Emily Burns, Scenes from the End – via expressionistic music, mime and multimedia – explores a subject that cannot be sufficiently articulated in mere words.

Héloïse Werner had captivating stage presence as the opera’s anonymous protagonist. Under Emily Burns’ figurative and innovative style of direction, Werner brought out the anguish, the despair and the intensity of Woolgar’s sparsely written piece. Werner used her versatile voice creatively, displaying consistent flair in operatic, avant-garde and bluesy styles. She is surely one of the most exciting young sopranos emerging in the industry.

Projected at the back of the stage, as literary annotations to the action, were notions of grief taken from writers such as T.S. Eliot, Shakespeare and A.E. Housman. ‘This is the way the world ends,’ reads Eliot’s poem ‘The Hollow Men’, ‘not with a bang but with a whimper.’ Together, the poems provided an insight into how death and loss have been previously contemplated in philosophy, theology and literature. Woolgar’s own libretto, though, relied on the strength of single words – ‘oblivion’, ‘inhuman’, ‘inevitable’ – given further potency in his musical realisation of their meanings.

It was the final section, grieving for the loss of a human life, that proved the most emotionally engaging in its portrayal of a mind in mourning. ‘Do not speak to me,’ sang Werner. ‘Do not patronise me … but stay with me.’

Raw and brutally truthful about the inevitability of death, this opera is a thought-provoking study of what it means to die, to lose and to end.