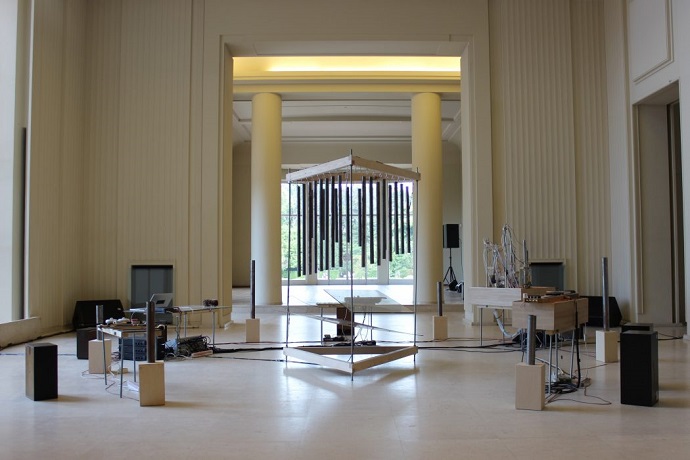 Hidden in a small bunker under a quiet apartment block in Berlin, ausland has acted as an incubator for the city’s experimental and improvised music scene for over ten years. For this performance, local echzeitmusik (literally: real-time music) artists joined touring Portuguese musicians for a performance with their sonic installation project, the Phonopticon.

The Phonopticon is inspired by philosopher Jeremy Bentham’s Panopticon theory, a model of total surveillance that has continued relevance in the age of Wikileaks. But whilst Bentham theorised a central authoritarian presence that could govern the behaviour of all citizens, the Phonopticon is an interactive structure that mediates collective improvised performance.

Traditional instruments and DIY electronics are amplified and connected through a central wooden structure to a mixing desk and laptop, which processes and manipulates the sounds of the entire structure. Suspended in the centre is a large rusty metal sheet, untouched in performance, but which vibrated with resonance throughout. At ausland the musicians used this electronic structure to create a sonic entity larger than the sum of its parts.

The first of two improvisations using the installation began with a cacophony of ear-ringing chimes, heralding a wildly noisy piece full of screeching overtones. The musicians seemed to have unleashed a greedy, noisy beast whose hunger could not be sated. Indeed, Ricardo Jacinto evoked the screeching of a pig on his cello by attacking the edge of his instrument with his bow. The sounds of wire wool on glass, wood and coarse stone were layered with Hanna Hartman’s nightmarish tape recordings, building to an unbearable resonance that rang in the ears long after.

The second improvisation was guttural and dark, starting with a skin-crawling duet between Jacinto and pianist Anaïs Tuerlinckx, frantically scratching their instruments with bows, plates and chains. Marta Zapparoli created spectral resonances from metal washers spinning down a series of spokes.  This improvisation left more space to appreciate the mechanics of this eccentric installation. After building to a growling and sinister climax, the performance ended with a steely, coarse afterglow as the suspended metal sheet vibrated and glistened under the spotlights. This was the howl of the ghost in the machine.