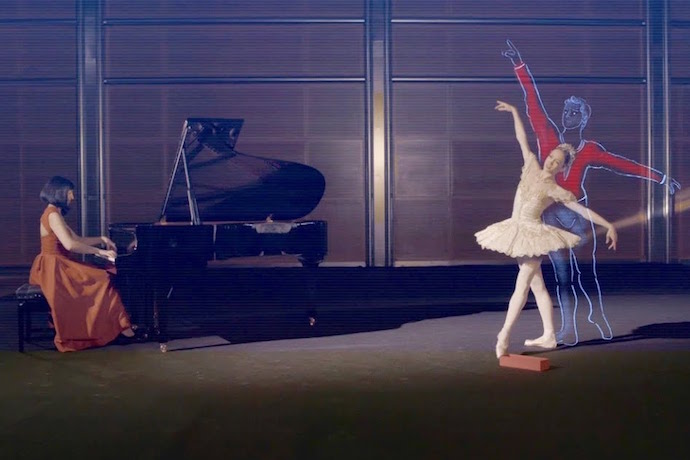 Alexandra Dariescu sweeps onto the stage and takes her place at the piano. Her movements are mirrored by an animated figure sketched in the style of Lauren Child’s ‘Charlie and Lola’ characters. But in a swirl of fairy dust, this figure disappears leaving us with a lone Dariescu who launches into an arrangement by Stepan Esipoff of Tchaikovsky’s Miniature Overture. Snowflakes begin to fall, a flurry turning into a snowstorm as the music quickens. It’s a magical moment.

This is the start of a bold concept devised by the Romanian pianist who is passionate about bringing music-making to new, younger audiences. Dariescu has brought on board a team of specialists, from video design company Yeast Culture to choreographer Jenna Lee. She also uses a ‘real’ ballerina, Désirée Ballantyne.

Dariescu performs 15 movements from The Nutcracker, arranged variously by Esipoff, Gavin Sutherland, Mikhail Pletnev, Percy Grainger and Tchaikovsky himself. They more or less follow the narrative of the ballet, and so we begin with ‘Scene’, during which we meet our Dariescu figure again, this time in her home. Much like the opening of the ballet when we encounter Clara and her family, so we see similar merrymaking here, all achieved via animation (the self-decorating Christmas tree is a particular delight). We also meet the Nutcracker, and see ‘Clara’ steal back to watch over him in the middle of the night; she falls asleep, begins to dream, and ballerina Ballantyne takes her place – at which point the animation becomes less caricature-like (all the animated figures from here on are based on real dancers and move with graceful ease). We see the Battle with the Mouse King and the Nutcracker being transformed into a Prince. And we’re taken to the Kingdom of the Sweets where we meet a host of beautifully drawn characters from Arabia, Russia and China, as well as the Sugar Plum Fairy.

Some of the piano arrangements are particularly gorgeous – Pletnev’s Pas de Deux in the Snow bursts with so much colour, texture and detail that I hardly miss Tchaikovsky’s lush orchestration. But what I do miss, fervently, is the passion of a proper pas de deux – it’s hard to be moved by a ballerina dancing with an animated figure, no matter how realistically he moves. The overall concept fares better in the Kingdom of the Sweets where Clara mimics the steps of the exotic characters she encounters rather than trying to dance with them.

It can’t be easy for Dariescu to sustain the right tempi required by the animation, and sometimes her performance lacks spontaneity; in her bid to be part of the action, she also occasionally loses focus. But all that changes with Waltz of the Flowers, a ‘concert’ Clara and her Prince are attending where Dariescu is the star attraction. Without having to make concessions to animated movement, Dariescu performs Grainger’s virtuosic arrangement with aplomb, her technique secure, her musicality apparent.

Which surely raises the point – isn’t the music enough? For me, possibly yes. But for my nine-year-old son, the addition of animation turned a serious concert into something fun and engaging. Is it a coincidence that he practised the piano this morning without being asked? I don’t think so.

For more information on the tour of ‘The Nutracker and I, by Alexandra Dariescu’ and the accompanying CD and book, visit alexandradariescu.com