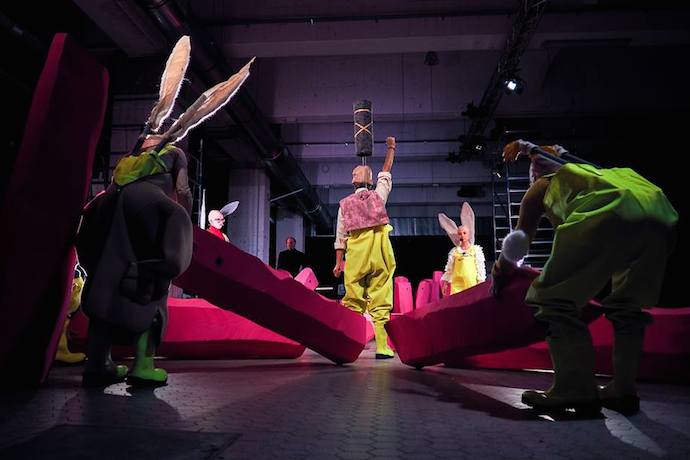 Joseph Beuys, the German avant-garde artist and environmentalist, died 30 years ago this year. Influenced by Dada and Fluxus, he is best known for performance art such as the 1965 work, How to Explain Pictures to a Dead Hare, in which he fulfils the promise of the work’s title, as well as for proclaiming that ‘Every human being is an artist.’ Committed to humanism and social reform, he was one of the founding members of the German Green Party.

To mark his anniversary, Soloistenensemble Kaleidoskop mounted the premiere of a new surrealist theatrical work, Jeder Hase ein Kunstler. The title, ‘Every Hare an Artist’, playfully takes its lead from Beuys’s work. Playwright Tom Patchett – most famous for Alf, the 1980s TV show about a furry alien living with a suburban family – wanted to provide a corrective to the artist’s low profile abroad. In Berlin, with this German translation by Ina Pfitzner, he was preaching to the converted.

Set at Beuys’ funeral, this fantastical play recruits a host of characters from the artist’s life, and others from German artistic and philosophical history (Friedrich Nietzsche, take a bow), to give a potted history of his life and works. In Berlin, director Georg Nussbaumer ramped up the absurdity, reimagining the entire cast as bunny rabbits. The versatile Soloistenensemble Kaleidoskop gave two-for-the-price-of-one, doubling as actors and string players providing their own ambient soundtrack.

Patchett’s text is fundamentally undramatic, baldly structured around a handful of key works and steeped in art history. Deeply passionate about his subject, Patchett ends up drowning in theory and analysis. Nussbaumer sucked out what life was left with constrictive and masochistic direction. The entire work was delivered in a whisper, with little movement and mostly with eyes firmly shut. With costumes of luminous waders, pom-poms and a set consisting of giant neon-pink columns, the production seemed to be going for plastic Dada. Its aloof abstraction and joyless surrealism did this complex artist a disservice.