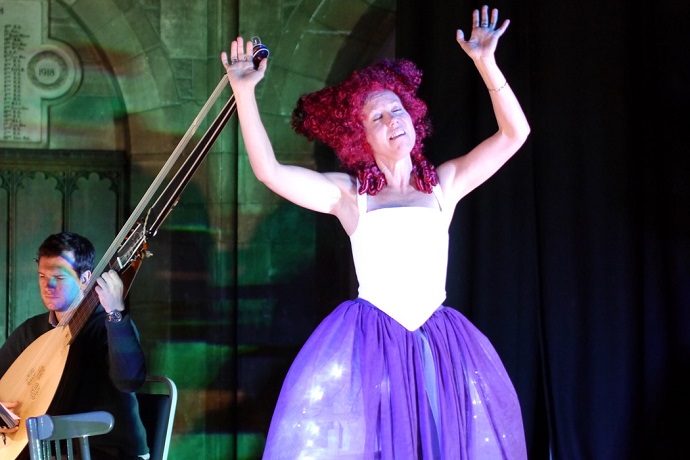 The Dunedin Consort in rehearsal for ‘Fantasy and Madness’

In this slightly atypical Cryptic production, director Josh Armstrong, along with John Butt’s Dunedin Consort and two singers, delivered an evening of 17th-century masque entertainment, intended to pass ‘the lazy time between supper and bed.’ An hour and a half of music by Purcell and Matthew Locke, combined with selections from loose Restoration-era adaptations of Shakespeare and Cervantes, was not always easy to follow. But soprano Mhairi Lawson and bass Matthew Brook excelled in their fine singing, clear diction and intentionally hammy acting.

Altogether it was a pleasing and straight-forward affair; an interesting departure from Cryptic’s usual contemporary music selection. The programme began with the small quantity of music Purcell wrote for Thomas D’Urfey’s heavily bastardised The Comical History of Don Quixote, then proceeded through much lengthier selections of Purcell’s and Locke’s music for The Tempest and Purcell’s for The Fairy Queen. The advertised ‘fantasy and madness’ were in fairly short supply: these adaptations conform to entertainment values of the period in only suggesting the troubling depths of the character’s emotions. Nevertheless, there were plenty of striking passages, such as, in The Tempest, a self-absorbed Neptune singing ‘Are all your sorrows past’ to Amphitrite as she cheekily stands up and slowly walks away.

The costumes, props and lighting were simple and effective, especially the rotating fish mechanism behind Amphitrite’s back as she sang about her Halcyon Days. But the pseudo-naivety of this production worked so well almost solely because of the exquisite performance by the musicians and singers. Historically Informed Performance Practice, the movement in which John Butt and the Dunedin Consort are world leaders, always lends a rough energy and variegated palette of sounds to rarely heard music, both of which were gloriously heightened in the many dance numbers featuring Alex McCartney’s excellent theorbo playing.

For a production like this, I wonder if the inviting, immersive effect could be enhanced by Historically Informed Audience Practice? The laughs from this Edinburgh audience were typically restrained and polite, so why not provide an indulgent 17th-century feast and some costumes so that we can all get into character as well?