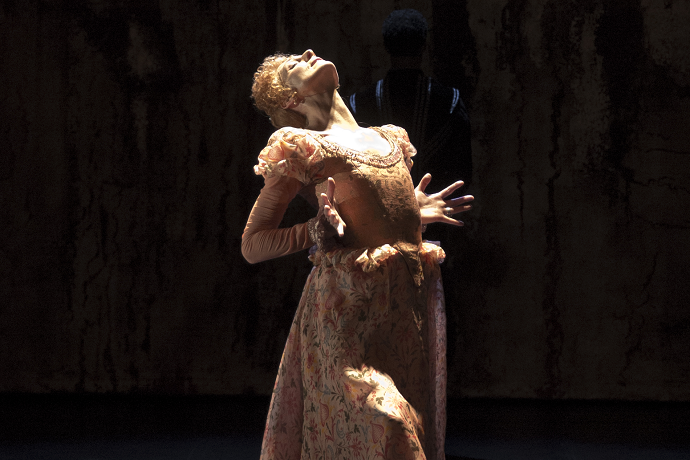 The stage descends into darkness; a group of actors and dancers in Elizabethan dress, lit up against an abstract golden backdrop, stands serenely on stage as a solo cello plays and an actor starts to narrate. So begins an evening’s story of love, passion, jealousy, madness and death in the Royal Ballet’s ambitious staging of Elizabeth at the Royal Opera House’s Linbury Theatre.

This was not a production of enormous scale, and that made it an impressive feat of stamina. Dancers Zenaida Yanowsky (Elizabeth) and Carlos Acosta (who played all four of the nefarious queen’s lovers) danced with poise and passion from beginning to end; solo cellist Raphael Wallfisch, illuminated, sat behind two robust stands overflowing with relentlessly virtuosic music, with barely a rest in sight.

Most notable was the way in which musicians, actors and dancers interacted and reacted to one another: Yanowsky’s and Acosta’s dance patterns slotted into the linguistic rhythms and spoken phrasings of the narrators, whose words were always perfectly audible even when coupled with music; similarly, the musicians and narrators responded to each other’s voices in phrases that reflected all the sorrow, joy, love and loss of Elizabeth’s reign. Wallfisch even followed the words, ‘That all the world did hate,’ with a strangled bowing effect, painting out some of the textual imagery in his sound. Complex juxtapositions of notes in duets between Wallfisch and baritone David Kempster added to the vitality of the performance; and the rare silences that came with the deaths first of the Duc d’Anjou and then of Robert Devereux, Earl of Essex, sent shivers across the audience. Contributing to this poignancy was the fact that all the words so engagingly delivered by actors Laura Caldow, Sonya Cullingford and Julia Righton were taken from original Elizabethan texts, written both by Elizabeth and her contemporaries; the music was based on works from the same period and included an occasional foray into Greensleeves.

All in all this was a highly successful collaboration between actors, musicians and dancers, who each played an equally important role under the spotlights of the stage. Only the opening lacked authority, perhaps, and a conglomeration of heavy-going multiple-stopped chords in the cello part contributed to a shaky start, but this was an anomaly in what was overall a highly commendable performance.