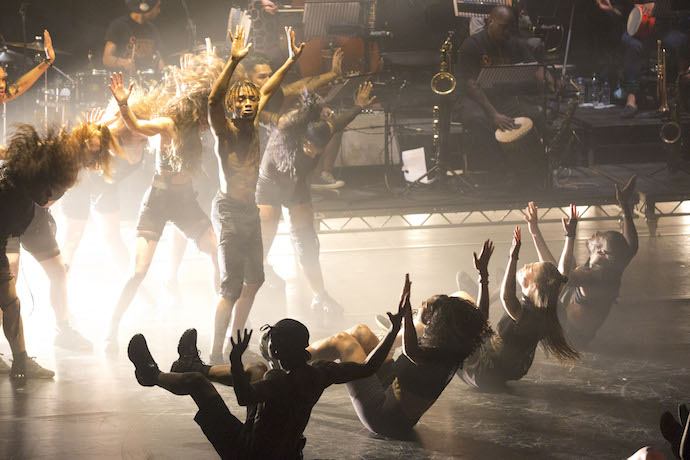 There’s nothing like a heady mix of hip hop and brilliant sunshine to put a smile on your face. Which probably explains why audiences at this year’s Breakin’ Convention over the May bank holiday weekend were in exuberant spirits. As was Artistic Director Jonzi D, who reminded us at regular intervals that this was the event’s 15th anniversary.

He has every right to be proud. The dancer, spoken word artist and director first brought Breakin’ Convention to Sadler’s Wells in 2004 ‘to exorcise the snobbery prevalent in these buildings, and to make the theatre more relevant to more of us’. A decade and a half later, the event is one of the venue’s annual highlights, bringing together people of all ages, ethnicities and backgrounds to celebrate the diversity of hip hop across three days of dance workshops, open mic forums, rapping and beatboxing sessions, interactive theatre and graffiti art in addition to the main-stage events. And the festival is spreading its wings: learning and engagement projects continue to flourish, with one strand, Future Elements, resulting in a made-from-scratch music video by teenagers being shown on the main stage; and this year, the event is touring to Toronto for a second time. Hip hop theatre is surely more relevant than it’s ever been.

If any reminder was needed of the crucial role music has to play in dance, the nightly presence of the Jazz re:freshed sonic orchestra not only underlined the fact but shouted it from the rooftops. Growing out of a live music residency on Portobello Road, the 15-strong ensemble including a turntablist and beatboxer is also celebrating its 15th anniversary, making this the perfect time to collaborate. And this was a true collaboration, with newly commissioned soundscapes by band leader Jason Yarde accompanying artists across the whole of the second half of the main-stage programme, each score tailor-made for the artists in question. There were big-band, high-energy scores for top-locking crew The Locksmiths and the ultra-slick, award-winning hip hop dance company Boy Blue Entertainment. There was sultry jazz (performed by exceptional singer-cellist Ayanna Witter-Johnson) for French b-girl Mufasa. And there was pounding solo beatboxing for Netherlands-based The Ruggeds. Dancers and musicians riffed off each other, and it was mesmerising to watch.

Recorded music was always going to sound lame in comparison, but the chosen soundtracks for the first half on Sunday 6 May were particularly poor, with only Edinburgh-based Room 2 Manoeuvre using anything that was remotely melodic (although BirdGang Ltd’s relentless, electro-beat score was exactly right for their high-precision, en masse movement). Disappointingly, Slovenian duo Zelijko Bozic and Miljan Nojic didn’t use music at all for their weird-but-entertaining Let’s Play (featuring a stack of cardboard boxes), but this was preferable to UMA, two poppers who danced to nothing but a repeated synthesised bass note – so amplified and distorted that it twisted my guts and made me feel sick.

Elsewhere, the standout performance was the Freestyle Funk Forum, an hour-long improvised event in the Lilian Baylis Studio Theatre. Four dancers, two musicians and a rapper – New York’s MC Supernatural, outstanding – took ideas from the audience and explored them on stage, in real time, both collaboratively and individually. It was inspiring and entertaining, and the crowd whooped for more.

Breakout sessions in the foyers were less successful, mainly because most of them were so crowded that unless you got there early you couldn’t see anything (the overzealous security guards didn’t help). Or maybe it was just that the shafts of sunlight rippling through the trees outside were simply too enticing to resist.