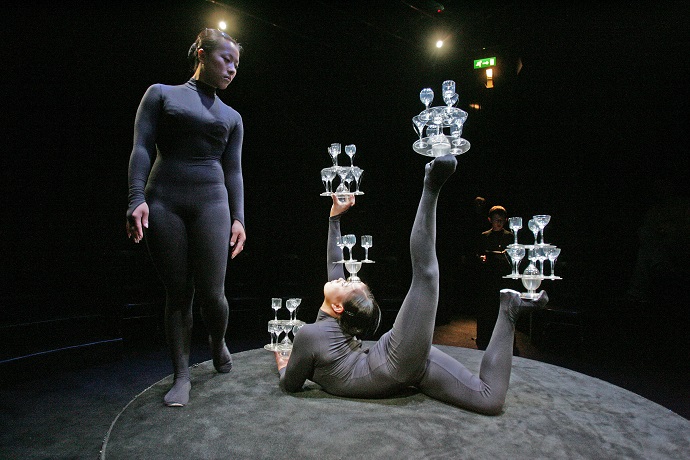 Acrobats in Rose English’s  ‘A Premonition of the Act’

While Rose English is arguably most famous for her theatrical monologues and performances, her latest exhibition at Camden Arts Centre, A Premonition of the Act, eschews live performance in favour of an insight into the thought processes behind her work. Presented as a work in progress snapshot of a larger ongoing project, the exhibition summarises over ten years of exploration into connections between the arts of glass blowing, music and traditional Chinese acrobatic balancing acts.

The first of the three rooms is dimly lit; pages are brightly spot lit on the walls, featuring research images, documentary stills and typewritten phrases overwritten with scribbled notes. A haunting operatic sound piece plays throughout, the creation of long-time collaborator Luke Stoneham, who scored English’s libretto specifically to accompany the exhibition. Complex cross-connections are established and highlighted in the text. At one point in the second room, a film shows a large vase being mouth-blown, before being thrown and caught on an acrobat’s forehead. The vase itself is exhibited on a table adjacent to the film almost as if to convince the viewer of its reality, of the vase as an object in itself rather than a mere prop. As the acrobats balance these delicate objects ever more improbably, there’s a sense of fragility that leaves you half-expecting the acrobats to falter and the glass to smash. English’s handwritten notes bring in themes of light, transcendence and ephemerality (‘luminescence’, ‘flicker’ and ‘incandescent’ all feature), some of which are echoed in Stoneham’s operatic piece, further adding to a sense of momentary suspension.

There’s no clear coherent message to the exhibition and on first sight it can be hard to see the relevance of some inclusions (the minor detour into the laboratory creation of electricity, for example) – but this is perhaps to be expected in an incomplete work. By forcing the viewer to connect the disparate strands English demands full engagement with the themes, which in some ways can be more thought-provoking than a finished and complete piece. There’s no knowing how the larger project will emerge, but it will certainly be an interesting journey.

A Premonition of the Act continues until 6 March