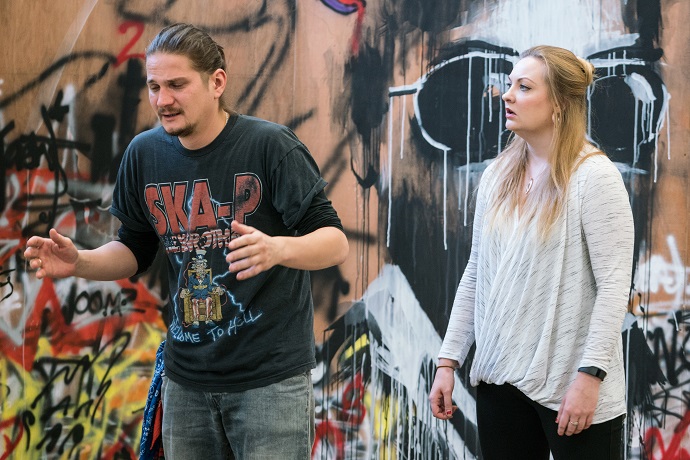 Gyula Nagy as Filotete and Jennifer Davis as Ifigenia in rehearsals for ‘Oreste’. Photo: Roger Way

If you’re looking to make sense of our turbulent political times, a 300-year old opera is perhaps not the first place you’d turn. Unless you’re Gerard Jones, a young Royal Opera House director creating an opera for our times.

Handel’s Oreste, first performed in 1734, was the business-savvy composer’s first pasticcio (‘pastiche’ opera) made entirely from his own back catalogue. Realising that he needed a hit, Handel brought together and re-texted his most popular arias of the previous 27 years along with newly composed recitatives. ‘It’s literally like a “best of” album,’ explains Jones. ‘We’ve got the Carole King musical at the end of our road [in Covent Garden], as well as Mamma Mia, and Oreste is actually a very similar concept – apart from the fact that the person sewing it all together was Handel. If anything, it makes it a slightly better piece, almost like a twice-baked soufflé. The arias are all very big hits.’

I think cruelty is in the air right now, and Oreste is all about cruelty and horrible behaviour.

With the narrative (adapted from Euripides’ Iphigenia in Tauris) centring around the sufferings of Oreste in a foreign land, and a tyrant king with a policy of executing immigrants, the parallels with our own age were too good to pass up. ‘Oreste is about a place where society has collapsed, and watching that should be a lesson that everyone in society is really worth saving,’ says Jones. ‘I think cruelty is in the air, and the show is all about cruelty and horrible behaviour. I feel very depressed and locked out from the world that I’m seeing around me, and my direction reflects that.’

To this end, Jones hopes Oreste will have a cathartic effect on its audience – ideally adding ‘healing post-Brexit Britain’ to Handel’s list of achievements. ‘You can look at it and you can look at yourself, and then you can go home and be better than it,’ hopes Jones. ‘If I can help people to stop being bastards to each other, that would be good!’

The opera’s Farage- or Trump-like figure is King Toante, who spends much of the opera trying to put Oreste to death as a stranger in his kingdom. ‘He’s anti-immigrant, anti-foreigner, anti- anyone that’s not him,’ Jones tells me. ‘You get that everywhere. I looked a lot at African dictators like Idi Amin and the young Mugabe. I’ve always been quite interested in dictators. I think they’re really good to watch, because they live it for you so you don’t have to.’ 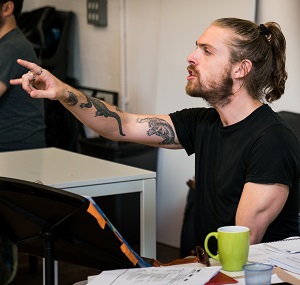 It will be an opera with a very modern sensibility – Handel wrenched out of his baroque opulence into a set ‘covered in graffiti, like the back of B&Q with a fire escape and loads of bin bags.’ The result will be ‘like I was directing the Euripides play but translated by someone like Joe Orton,’ Jones continues. ‘It’s very kitchen sink and very comic and farcical, but it’s also very dark and very bleak. It would be a bit like having a severed head in a carrier bag.’ Jones aims to have us laughing at Oreste’s inability to recognise his own sister one minute, and have us repulsed by the brutal place our hero finds himself in the next.

None of this is quite what you’d expect when listening to Handel’s music. Jones is something of a Handel super-fan (‘anyone that doesn’t love Handel needs to get that sorted’), but how does the baroque giant’s stately and intimate compositions fit with the director’s ambitious backdrop of social realism? ‘The fertile soil lies between the super-real activity and the super-unreal music, in the gap between the beautiful sounds and the ugly image. If you propose two things at the same time, the audience can look at the chasm between them and judge for themselves how they relate to each other.’

It’s a philosophy that takes the values of gritty contemporary theatre and traditional opera and confronts the audience with their differences, adding new layers of thematic complexity. On the whole, we should expect something fresh: the music of Oreste is rarely performed, and Jones has been listening to Handel for twenty years without coming across the arias before. The director’s bold artistic vision will undoubtedly take opera fans to places they don’t expect to go. Performed in the unusual and intimate venue of Wilton’s Music Hall with a young cast primarily in their twenties, Oreste is an argument for the continued relevance of opera and its capacity to be taken beyond traditional staging decisions and performance spaces.