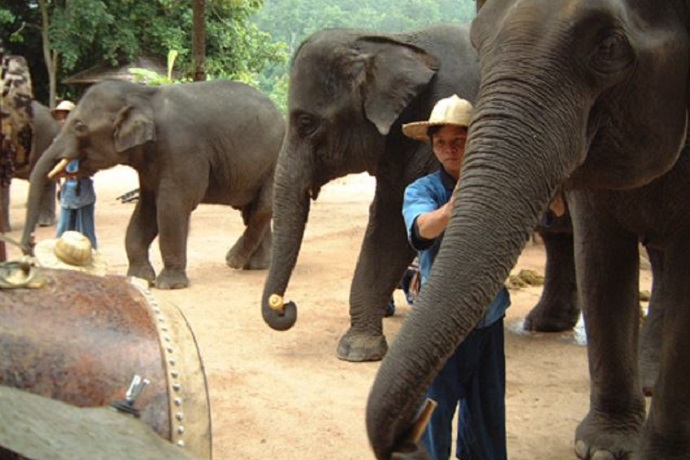 What do you get when you mix together a violinist, an array of makeshift Thai instruments and a few creative elephants? Other than the beginning of a bad joke, that’s the Thai Elephant Orchestra described in a nutshell.

The group is exactly what its name promises. Located in Lampang, a town in northern Thailand, the ensemble operates as a fully fledged organization. Their theatre is the Thai Elephant Conservation Center, their audience tourists and their members, well, elephants.

‘We tried playing with a full orchestra of fourteen elephants at once, and it was just virtually impossible. That’s the kind of thing that’s only been done once,’ laughs Dave Soldier. His background is as interesting as the elephants he works with: co-founder of the movement, he is part-time violinist, part-time composer and a neuroscientist currently teaching at Columbia University in New York City. Recently, however, the elephants have stolen the show. A confirmed animal lover, Soldier teamed up with Richard Lair a few years ago after the latter had hosted artists to paint with Asian elephants in a fundraising bid. This provided a sanctuary for these former logging animals, who face extinction due to loss of habitat and, in Thailand, loss of work.

There’s Meikot, who’s about 35 now, and she loves to bash the hell out of the gong.

The idea for the orchestra came while musing what else the elephants could accomplish. ‘The conservation center was an idea to keep the elephants together in a place where they would be cared for. But it wasn’t clear that there would be the government support or philanthropy for it, so we started the orchestra for public awareness,’ Soldier said.

And raise publicity it did. Indeed, it would be hard finding a stronger selling point than Thailand’s favoured animals. Since 2000, the orchestra has released three albums of solely elephant-produced songs, with no overdubbing and no fixing; just drum beats, bell chimes and the impatient squeak from a harmonica holder breaking or making the melody.

But there are some instruments even the most talented elephants cannot play, so Soldier and his team developed some that were suitable for the their capabilities and reflective of Thai culture, including rents (marimba-esque instruments), harmonicas and drums that can be played with trunks. Once supersized and elephant-proofed, the instruments were quickly mastered, and the elephants’ unique tastes materialized quickly. ‘There’s Meikot, who’s about 35 now, and she loves to bash the hell out of the gong,’ Soldier says. ‘Just loves to smash it. Most of the time people aren’t even telling her to do it, she just won’t stop.’

In most sessions, the elephant trainers (mahouts) rarely give direction other than when to start or stop playing. The extent of Soldier’s professional composing lies with picking out the instruments and starting the show. The pieces emerge through improvisation, which has led to some classic songs like Floating Down the Pin River, originating from a time when the mahouts, cheerful after a good party and just enough Mekong whisky, agreed to play traditional string instruments with their elephants during a tropical monsoon.

However, like all good musicians, the elephants support themselves with a day job. They work in tourism, giving visitors rides through the forest or having their tongues petted. In the midst of rising support for the centre and rising costs for the orchestra, Soldier released Water Music, their third and final CD, in 2011.

‘In a sense, we’re happy to be victims of our own success. We wanted the conservation centre to become a success, and like it or not, tourism is the clearest way forward for the conservation effort,’ Soldier said.