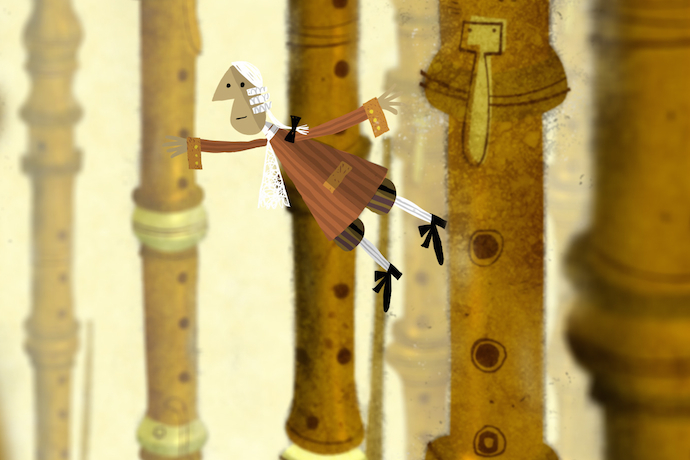 ‘Are you going to film this interview?’ asks Grégoire Pont, as I glance sheepishly at my low-tech notepad and pen, ‘… only I am having a fight with my hair this morning.’ It is easy to warm to the Gallic charm of this affable French artist, who has been captivating audiences with his live illustrations of classical music for over twenty years. He’s back in France when we Skype, buoyant from his appearance with François-Xavier Roth and Les Siècles at the Royal Festival Hall, where Pont had provided animations for Ravel’s Ma Mere l’Oye. I notice a guitar and metronome in his study – is he a musician too? ‘No, no …’ he says. Then ‘well, maybe … I do feel I am part of the orchestra’. 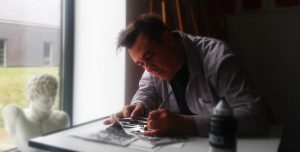 It is hard to imagine that an artist could do what Pont does without feeling part of the orchestra. Pont is a lover of classical music and a storyteller. Put simply, he illustrates what we hear with endearing images, drawn directly onto a computer screen and projected behind the orchestra. Pont’s gestures correspond skilfully to musical phrases like a conductor’s baton: audiences see a handless, brushless painting emerge – lines, shapes, characters appear as if from nowhere. You know there is some tidy technology involved, but it is still hard not be enchanted. I watched a clip of Petit Poucet: in a moonlit forest, white-contour birds flutter to the ground and peck at the crumbs. Tom Thumb, a small lost soul, peeps from behind a tree. It made me think of the timeless appeal of René Goscinny’s stories and Jean-Jacques Sempé’s illustrations for the 1960s Little Nicholas books. Perhaps we are momentarily experiencing music in a child’s world, rather than an adult’s.

I have never been able to hear music without seeing a story unfold.

In fact, Pont’s work grew directly from the responses of children. Driven by a passionate desire to bring classical music to young people, he made his first illustrated concert in the late 1990s to Prokofiev’s Peter and the Wolf. Pont dressed in black, put on black gloves, took a white pen and seated himself backstage in front of black sheets of paper. He positioned a camera above the paper and as the music started, he began to draw. He had prepared a simple flying bird: a piece of paper folded in two so that the wings could move. Whenever he flapped the wings, he could hear the children laugh and clap. It was a turning point.  ‘Drawing was not enough,’ he told me. ‘I had to have this relationship between animation and music. Animation is a living thing – it is part of the magic.’ Since then, Pont has devoted his career to musical animation. He has illustrated works by Debussy, Ravel, Bartok, Stravinsky and contemporary pieces such as the 2006 flute concerto by Marc-André Dalbavie.

A still from Pont’s take on Ravel’s ‘Mother Goose’

Right now, Pont’s hair is possibly the only thing that does not seem to be behaving in an entirely agreeable manner. Things are going very well. He has a diary full of work, concert tours with Les Siècles to Japan and Europe, and he has plenty of ideas for the future. ‘I think maybe I have a sort of synaesthesia,’ he says. ‘I have never been able to hear music without seeing a story unfold’. Does he ever find that not everyone wants their Ravel or their Debussy with pictures? Yes, he admits, he has experienced that response once or twice. Yet there is such a genuinely infectious goodwill about Pont’s animations that I would defy even the most hoary critic not to raise a reluctant smile.

Pont doesn’t set out to subvert composers’ ideas, and although he may not be a musician, he thinks like one. I’m intrigued, for example, by his treatment of Ravel’s Bolero in 2011. The flute appears as a softly undulating blue circle, the snare drum is a rhythmic visceral smudge. The forte brass are strident yellows: he is simultaneously drawing timbre, texture, attack and phrasing, all set against the ever-present smudging snare in the background. More fascinating still, he shifts seamlessly to harmony: a bold white rectangle illustrates a vibrant E-major chord. Pont’s dancing shapes and lines are suggestive rather than prescriptive: a light passing, a fleeting glimpse of an idea. I leave our conversation feeling that whatever music Grégoire Pont is drawn to next, it will be in very careful and creative hands.