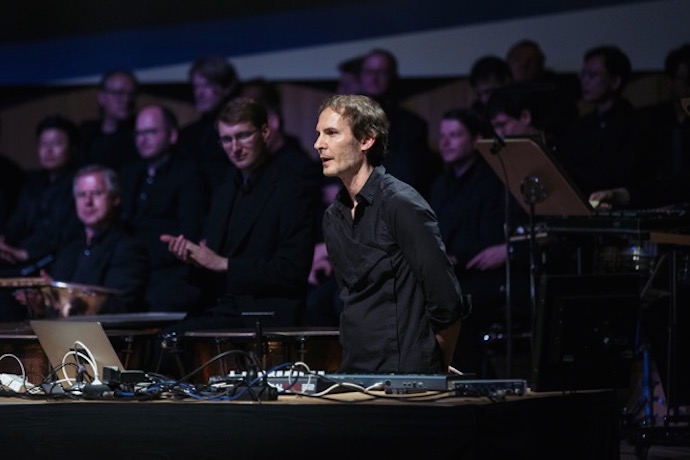 Dresden is a city of old and new, populated by ghosts: remains of buildings bombed in World War Two, reconstructions of others; modern eyesores that fill war-flattened land, reaching skywards in the form of apartment blocks, hotels and cranes; and still beautiful Baroque buildings that stand strong and defiant. There could not have been a more fitting location for this one-off performance by the MDR symphony orchestra and choir, with composer Sven Helbig on electronics. Helbig’s scoring juxtaposed traditional and modern compositional techniques before the cinematic backdrop of a silent black-and-white movie about German priest, monk, composer and theologist Martin Luther (1483–1546), whose statue guards Dresden’s Frauenkirche still today.

Ein Film der deutschen Reformation (1927, dir. Hans Kyser) tells the story of Luther and his determination to stand up to the Roman Catholic Church, the 95 theses that he nailed to the door of Castle Church in Wittenberg in 1517, his translation of the Bible into German, his outlaw by the Holy Roman Emperor Charles V, and his excommunication by the Pope. The music starts with a traditional Kyrie Eleison, its pure and plaintive harmonies offset by a sinister electronic overlay. On screen a scene unravels: a body hangs from a crucifix in a ghostly mist; a man walks by, becoming two and then one again, almost as though he is both alive and a ghost of himself; and then the word ‘Luther’ appears in huge print across the screen. The story is about to begin.

Live music in film showings can feel superfluous. In Under the Skin for example, the London Sinfonietta’s performance, though proficient, for me added little more than an unwelcome distraction. But here, choir, orchestra and electronics resonated through the concert hall, with voices blending and soaring against sinister drumbeats, electronics or dissonant string drones – Luther’s beliefs, piety and the dangers he faced for his outspokenness epitomised in sound. The concert hall became a religious refuge as we listened to choral plainsong, Kyrie Eleison and Agnus Dei, with strange contemporary undertones; a dungeon of silence and white noise as bodies hung silhouetted against a full moon; a claustrophobic space as an overwhelming mass of sound engulfed us, mirroring Luther’s experience of being crushed and lost in a crowd.

When the mob faded away and a peaceful procession of women made its way across the screen, so the music calmed into held string tones played against the repetitive rhythm of a snare drum, then joined by ethereal harmonies from the choir. The music ebbed and flowed with the story, encompassing genres reminiscent of everything from choral evensong to sci-fi soundtrack, Carl Orff and fully orchestrated Latin-American. Despite being stylistically bizarre in places, there was no sense of disconnect – no feeling that this music should be performed in any way other than to complement what was happening on screen, or that a pre-recorded substitute would suffice.

The combination of music and movie here resulted in a powerful rendition of the story of Luther’s struggles and path to enlightenment. It was disappointing to see only a half-full concert hall for what was an excellent performance executed with great proficiency and care.

For a different musical reimagining of Ein Film der deutschen Reformation click on the video below.